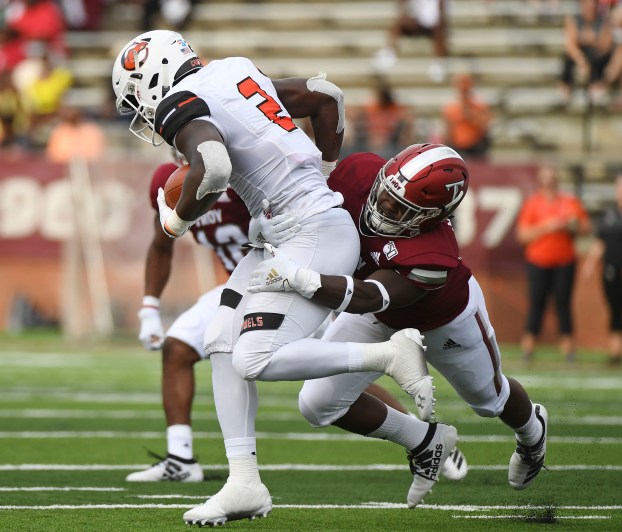 Trojans adjusting to life without football

With the status of the 2020 college football season still up in the air, members of the Trojan football team are adapting to time away from the field and the facilities.

The coronavirus rocked the sporting world earlier this year, suspending or canceling athletics all across the nation.

Football however is still months away and there is hope a normal season could still happen. Because of that the Trojans are staying mentally and physically ready.

“Hopefully in early June we can get these guys back on campus and get them into some type routine,” head coach Chip Lindsey said. “This summer is going to be like no other. Just talking to our team they are really chomping at the bit.”

The Trojans had just five practices this spring before the pandemic shut things down. Since then the players have had to fine ways to stay engaged as they wait for the return of football.

“I’m doing great right now,” Martial said. “Trying to stay in a routine. I’m working out, trying not to lose any muscle. I’m looking forward to next year.”

“The offseason was different with spring practice being cut short,” Luke Whittemore said. “We are excited to get back on campus to see where everybody is at.”

“I’ve been lucky enough to have some good springs,” Whittemore said. “It’s something that everyone is going through. We actually got five practices in. A lot of schools don’t have that many or none at all. It’s a great time to work and we’ll miss it, but we have to take it in stride.”

The Trojans have had to be creative when it comes to getting their workouts in. Whether it’s in their garage or at a teammates house, the Trojans are finding ways to get their work in.

“We constructed a rack at Grant Betts house, so I have been up here more,” offensive lineman Dylan Bradshaw said. “It’s been a challenge and it’s been different.”

“Over here they closed all the gyms, so I put a weight rack in my garage,” defensive lineman Will Choloh said. “Me and my dog have been running around the neighborhood as much as possible. Doing the little things here and there to stay in shape so I’m ready to go.”

Troy running back B.J. Smith got into just two games last year  before sustaining an injury.Smith is finding ways to get his rehab in despite not being able to be with his teammates.

The challenge for new strength and conditioning coach Rusty Whitt is finding workouts that every player can participate in.

“They are trying to develop a plan that works for everyone,” Lindsey said. “Some of those guys have access to a bench or a squat rack. We have had to be very creative. Coach Whitt takes a lot of pride in training our guys. We are trying to adapt to the times.”

Although it may look a little different, Lindsey is confident there will be a season.

“I’m pretty confident we are going to have a season,” Lindsey said. “Whether it’s altered or not, I think it’s still too early. I think there will be a season, but what it will look like is to be determined.”