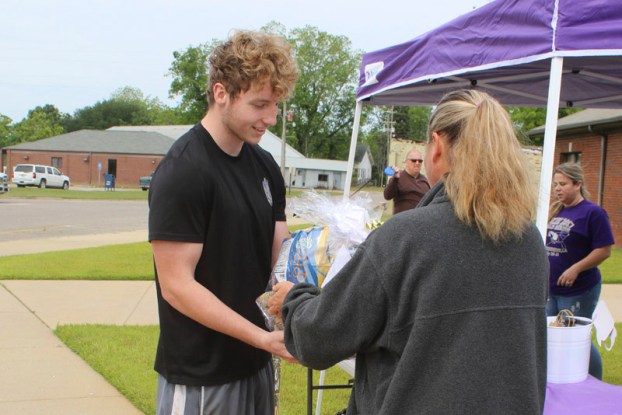 “We weren’t sure how everything was going to turnout,” said Kristy Stanley, mother of Goshen senior McGwire Stanley. “I have had a lot of teacher friends that were sharing ideas and stories about what was going on in their community. This has allowed us to do something to let them know that we care.”

Each volunteer adopted a senior and provided baskets to be picked up on Friday. Each basket was different on Friday. Baskets included everything from cookies and chips to graduation decorations for the senior houses. The students entering the military got special patriotic items in their baskets.

“A lot of them had cookies and candies,” Stanley said. “All of them had gift cards to a lot of the local places. We put flags in the baskets for the ones that were go into the military, thanking them for their service. There were a lot of fun and cute ideas that people came up with.”

Goshen High School has 76 students in the class of 2020. Goshen parents were at town hall for about two hours on Friday morning.

“It’s turned out really good,” Stanley said. “One hundred percent of the seniors were adopted. It’s been really cool to see everybody happy to do it. We feel for the senior class.”

Around approximately 50 students arrived to pick up their baskets. With approximately 20 baskets remaining, Stanley and the rest of the volunteers are out trying to track down the remaining seniors and give them their gift.

“Trying to get 100 percent of the students to realize they were adopted and come pick up their packages has been difficult,” Stanley said. “We are delivering the last 20 of those baskets. We told them to pick them up, but some of them work and they’re not able to pick up their baskets. A couple of the senior girls are helping me find out where they work. If that doesn’t happen we are going to go on Facebook and try to track someone down that knows them.”