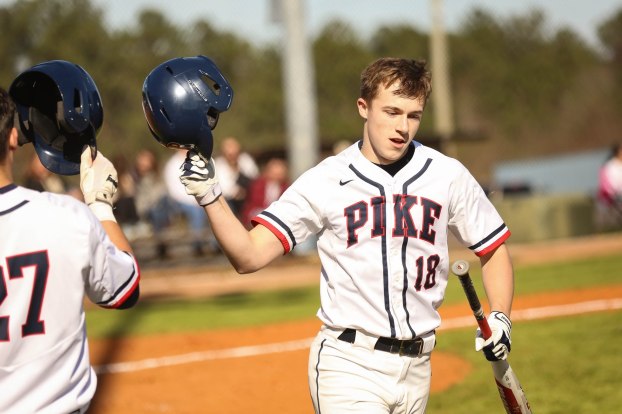 The senior is now saying goodbye to the Patriots after being very active on the playing field and in the classroom.

“It’s been really fun, especially with the two state championships,” Allen said. “That was extremely fun. I’m going to have lifelong friends from Pike and I’m going to remember a lot.”

“It’s been difficult not being with my friends,” Allen said. “I’m not certain if we are going to have an on-time graduation or other senior activities.”

Along with playing for the Patriot baseball team, Allen also played football for head coach Gene Allen. Off the field, Allen was just as busy. He was the SGA Treasurer the past two years and was in many different clubs throughout his high school career.

“It’s good to be in different groups and organizations,” Allen said. “You have different friends outside of sports.”

On the field Allen excelled in both baseball and football. Before his baseball season was cut short, Allen played in 15 games for the Patriots in 2020. He had 57 plate appearances and 48 official at-bats. He had a .417 batting average with an on base percentage of .509. He had one home run and nine RBI. As a junior, Allen earned First Team All-State honors.

“It was extremely fun,” Allen said. “I have been extremely blessed to play on such great teams.”

Allen and the Patriots baseball team are back-to-back state champions and looked like they had a chance to return to Montgomery in 2020. The success of the program doesn’t come to a surprise to Allen.

“I have played baseball with the guys in my grade for a long time,” Allen said. “We have been pretty good throughout the years. We kind of expected to win, so we worked hard and accomplished our goals.”

On the football field in 2020, Allen took more of a leadership role after the Patriots said goodbye to key seniors including Jade Sikes, Cody Hollis and Max Copeland. It was a role he carried into baseball season.

“Becoming a senior, I felt like I needed to become more vocal,” Allen said. “It’ something that I worked on.”

Allen will always be thankful for the impact that both Gene Allen and Allen Ponder made in his career.

“I will always remember them helping me,” Allen said. “They were really great.”

Allen is now looking ahead to college. He hopes to continue playing baseball at the collegiate level.

“I am going to play baseball at the next level,” Allen said. “The recruiting has been put on pause because of what has been happening. I have a couple opportunities and I haven’t really decided yet.”

Troy head basketball coached added to his recruiting class on Thursday morning when he announced the addition of Montgomery’s own... read more