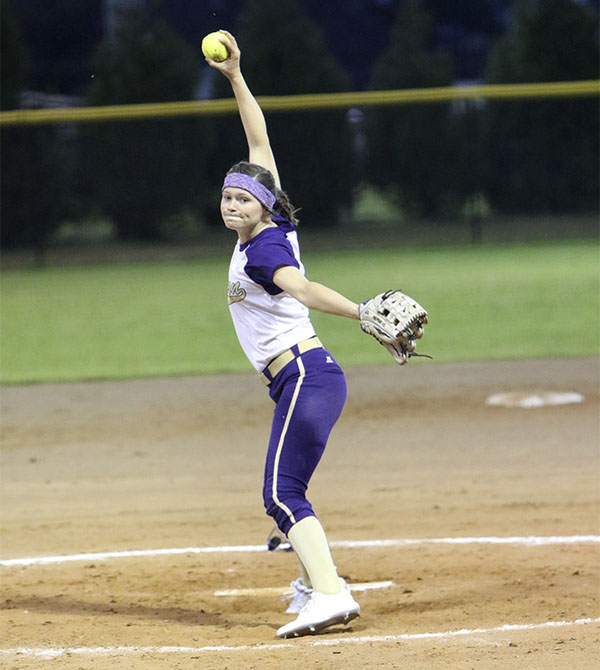 Photo/April Brown Alexis McLendon delivers a pitch for the Goshen Eagles earlier this season. McLendon and the rest of the Eagles’ season was canceled due to the coronavirus.

McLendon looks to the future after senior season was cut short

About a month ago, Goshen senior Alexis McLendon was preparing for what she hoped was a return to the softball field. Instead, she is now preparing and planning for college.

The Eagles, like many high school teams in the state was holding on to some hope that they could return to their field in some capacity in 2020. The season was ultimately shut down soon after.

“I’m trying to get ready for college now,” McLendon said. “Trying to figure out what I’m going to do after quarantine is over.”

While many younger athletes are still looking ahead and hoping to play next season, McLendon is still letting the fact that her high school career is over sink in.

“It’s unreal sometimes,” McLendon said. “You hear people saying ‘oh can’t way to next year and ready for another ride.’ You realize you don’t have that. It kind of hurts.”

McLendon spent hours working on softball with her teammates. Now, McLendon is trying to hammer down her final plans before heading to Lurleen B. Wallace in the fall.

“I’m actually getting scholarship things ready,” McLendon said. “I’m ready for the fall semester. Trying to get everything settled in and trying to figure out my next move.”

McLendon will not pursue softball at the collegiate level. Instead, she will focus on academics. She will be entering college after a memorable four years at Goshen High School.

On the softball field, McLendon and the Goshen players were more than just teammates, they were family.

“It’s like a sisterhood,” McLendon said. “We were all one big happy family. We rarely didn’t get along. It was just a fun time and a time to let everything go.”

McLendon, along with cheering, played volleyball and softball at Goshen, where she played under head coach Amy Warrick.

“She (Warrick) put in all of her time, blood and sweat into the program,” McLendon said. “That means more to me than anything. Knowing that she is dedicated as much as means everything.”

Whether playing volleyball or softball, McLendon saw the same passion and dedication out of her head coach.

During this her away from the softball field, McLendon learned to never take tomorrow for granted.

“Do everything to the fullest of your abilities,” McLendon said. “Don’t focus on tomorrow. Get that assignment done today. Do the drill that day. Don’t expect to have tomorrow.”

Pike Liberal Arts senior Ansley Adams was routinely at the school from the early morning hours to the early evening.... read more