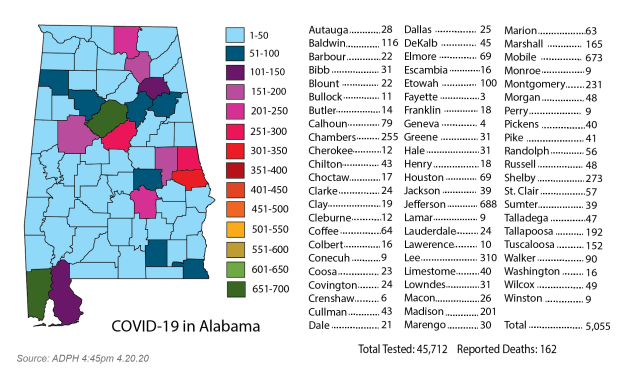 As of 6 p.m. Monday, the Alabama Department of Public Health reported 41 confirmed COVID-19 cases in Pike County, with no hospitalizations and no confirmed deaths. As of 6 p.m. Friday, the total of positive cases was 29.

Mayor Jason Reeves said the number of individuals being tested at Troy Regional Medical Center continues to decline, and he believes the increase in positive test results stems from tests conducted late last week at other testing sites in the county.

“All total, I think we’ve had more than 600 tests conducted throughout the county,” he said on Monday.

Alabama on Monday topped 5,000 confirmed cases of coronavirus as the state weighs a decision on whether to extend closure orders past April 30.

The Alabama Department of Public Health said Monday that the state had 5,078 known cases of COVID-19. There had been 113 confirmed deaths and the state was investigating an additional 50 deaths in COVID-19 patients.

The state’s current stay home order, which has closed many nonessential businesses, lasts through April 30.

Alabama Gov. Ivey’s office said the governor and State Health Officer Scott Harris will be reviewing and announcing a plan on or before April 28. Ivey is set to receive input from the state’s congressional delegation this week.

A Birmingham City Council member on Monday asked health officials to release additional information about COVID-19 cases by zip code. He also said there needs to be additional testing to track the spread of the virus.

“We are going to have to expand testing sites and the testing in order to open up the economy,” Birmingham City Councilman William Parker said.

The state has said that more than 500 patients and employees in long-term care facilities have tested positive for the virus. Alabama health officials announced Friday that the Alabama National Guard would help disinfect nursing homes that have COVID-19 positive residents.

Georgia’s governor announced plans Monday to restart the state’s economy before the end of the week, saying many businesses that closed to mitigate the spread of the coronavirus could reopen as early as Friday.

The governor in neighboring Tennessee planned to let businesses in most of his state begin reopening as soon as next week.

Georgia’s timetable, one of the most aggressive in the nation, would allow gyms, hair salons, bowling alleys and tattoo parlors to reopen as long as owners follow strict social-distancing and hygiene requirements. By Monday, movie theaters may resume selling tickets, and restaurants limited to takeout orders could return to limited dine-in service.

Such a swift reopening runs counter to the advice of many experts, including Dr. Anthony Fauci, the government’s top authority on infectious diseases, who warned again Monday that resuming business too soon risked a fresh spike in infections.

Republican Gov. Brian Kemp said it was important to allow businesses that had been shut down a chance to get some revenue flowing.

“I think this is the right approach at the right time,” Kemp said. “We’re not just throwing the keys back to these business owners. We’re talking about people the government shut down their business.”

Brundidge was truly blessed. That’s how Brundidge Mayor Isabell Boyd described the town of 2,076 in the aftermath of the... read more