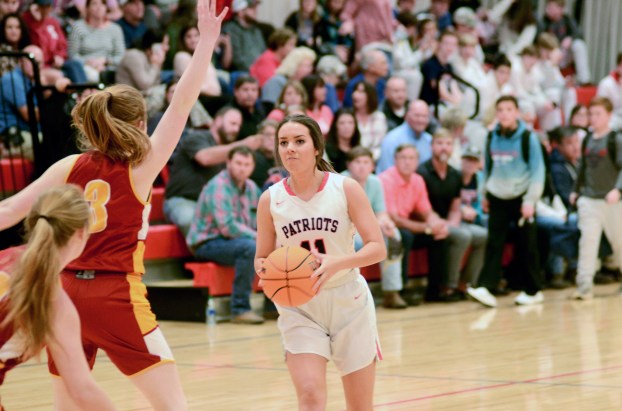 Pike Liberal Arts senior Ansley Adams was routinely at the school from the early morning hours to the early evening. Now, Adams is looking to find ways to fill her day.

A cheerleader, basketball player and a softball player, Adams was in the early days of her senior softball season when things came to a sudden halt.

Adams spent time on the softball field on a daily basis. If she wasn’t playing a game, she was on the field practicing with the team.

“We were practicing every day and having games every other day,” Adams said. “Now, we are doing nothing but sit at the house.”

Adams didn’t just spend time on the softball field. The senior rarely took a season off. When she wasn’t playing softball, she was spending the fall months on the cheerleading squad and the winter months playing for the Lady Patriots basketball team.

“Honestly, there was not one day the entire school year that I just went home after school,” Adams said. “I stay at school until 6:00, practicing softball, basketball and cheer. It taught me a lot. All the life lessons that I learned came from my coaches. I have had to get used to not being around my role models and my friends. It takes a toll.”

During the fall of her senior year Adams was named Homecoming Queen at Pike Liberal Arts. That was one of many memories she will have of her senor year.

During their time away, Adams and many seniors are spending time sharing memories and their hopes for the future.

“We have been sending memories from last year,” Adams said. “We’ve been talking about how ‘right now we should be doing this.’ After this is over we want to get together and do something sweet for all the seniors.”

Adams will be able to reflect on the Lady Patriots basketball season under head coach Brandon Matthews. The Patriots advanced to the Final Four in Montgomery.

“I can’t even put it into words,” Adams said. “It taught me so much. Nobody believed in girl’s basketball at Pike. We completely changed the standard with tons of hard work. We spent every day in the gym. At the beginning of the season we practiced at 5 a.m. before school. It thought me how to work my butt off in order to achieve something great.”

Adams and the Pike Liberal Arts softball team was hoping to take another step towards a state championship in Montgomery this season. Instead, Adams is left to think about the impact that head coach Robert Rolland has made in her life.

“He was much more than a coach to me,” Adams said. “He has taught me so much. He is always at the softball field. He has been so sweet to all of us. I don’t know what we would do without coach Rollan.”

During this experience, Adams has had the opportunity to look back at her time at Pike. “Looking back, I’m going to miss all the teachers and the faculty,” Adams said. “They helped me in so many ways. Sports, I’m going to miss the most.”

‘We can’t afford another shutdown’

As lawmakers on a state and national level call for reopening the economy, public health officials continue to urge caution... read more