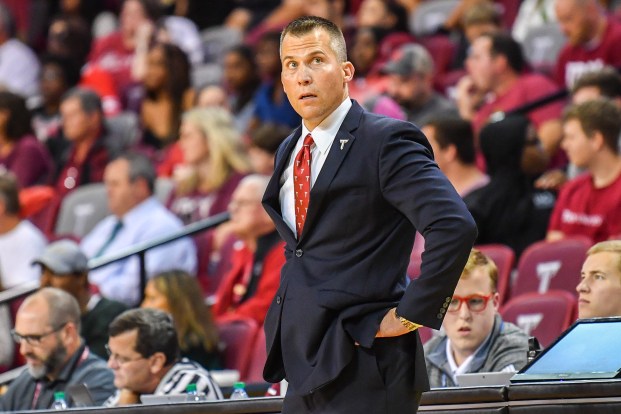 Scott Cross and the Troy Trojans locked in four new players to the class of 2020 this week.

The Trojans added to their class on Thursday morning when Robert E. Lee standout Duke Miles signed his National Letter of Intent.

“Extremely excited about this group,” Cross said. “I’m probably more fired up about this recruiting class as any class that I have been a part of. These four players are definitely the type of players we want in the program. They make us better from day one. They have all the attributes that we look for in our players.”

Year one didn’t end where coach Cross and the Trojans would have wanted it. They ended the year 9-22 overall and 5-15 in conference play. Following the end of the season, the Trojans lost junior Darian Adams and KJ Simon, both transferred to different schools.

“I would definitely say this has been the most important recruiting class that I have ever been a part of,” Cross said. “It was imperative that we signed some guys that are capable of winning a Sun Belt championship.”

With Adams now at Jacksonville State and Gordon in the transfer portal, the Trojans were in need of a point guard.

“Point guard was probably the biggest concerned,” Cross said. “We had to address that and make sure we had two really good point guards who can come in and play right away. Duke can come in as a freshman and have the ability to play significant minutes.”

With the addition of the four players, Cross believes his team will have more success during the 2020-2021 season.

“The ultimate goal is to win a championship,” Cross said. “You don’t ever want to go into a season and not believe you can win a championship. Your focus has to be on getting better every day. I expect to have more success than we had last season.”

Alabama native Duke Miles is 6’2” and comes to Troy after playing at Lee High School. Miles helped lead the Generals to a 33-1 record and a state championship this past season. He was Lee’s first Alabama Sports Writers Associations’ Super All-State Team selection.

“When I first saw him, he had everything we were looking for,” Cross said. “He is a guy that plays on both sides of the ball. He defends extremely well. He is a guy that can really slash and get to the basket.”

Mills averaged 17.4 points per game as a senior to go along with 4.8 assists and 3.1 steals. He earned a spot on the ASWA All-State First Team and was one of three finalists for the Alabama 7A Player of they year.

“Runs like a gazelle,” Cross said. “He has great hands. He is a guy that is going to help us in the pick and roll. He will put pressure on the defense when he runs the floor.”

Pantophlet will be joined by former Tyler teammate Kieffer Punter. A 6’4” guard from New York City, Punter averaged 11.9 points per game and 4.7 rebounds per game last season. He was one of best 3-point shooters in the NJCAA a season ago, shooting 46.1 percent.

“Love what he does,” Cross said. “A great person. He can really shoot the basketball and has the capability to go off the bounce. But he is really known for his 3-point shooting. One of those kids you love to coach.”

Tuner, a 6’7” forward, comes to Troy from Grand Praire, Texas. Turner was named the Texas Class 6A Defensive Player of the Year a season ago. Turner averaged 14.2 points and 5.5 rebounds last season. He had a 38 point, 12 rebound performance in a game against Waxahachie last season.

“He can really shoot the three and he is a great passer,” Cross said. “What really got me fired up was the fact that he won defensive player of the year. Extremely coachable and he does all the little things.”

When schools closed statewide due to the coronavirus, there was a short span when schools were not feeding lunches to... read more