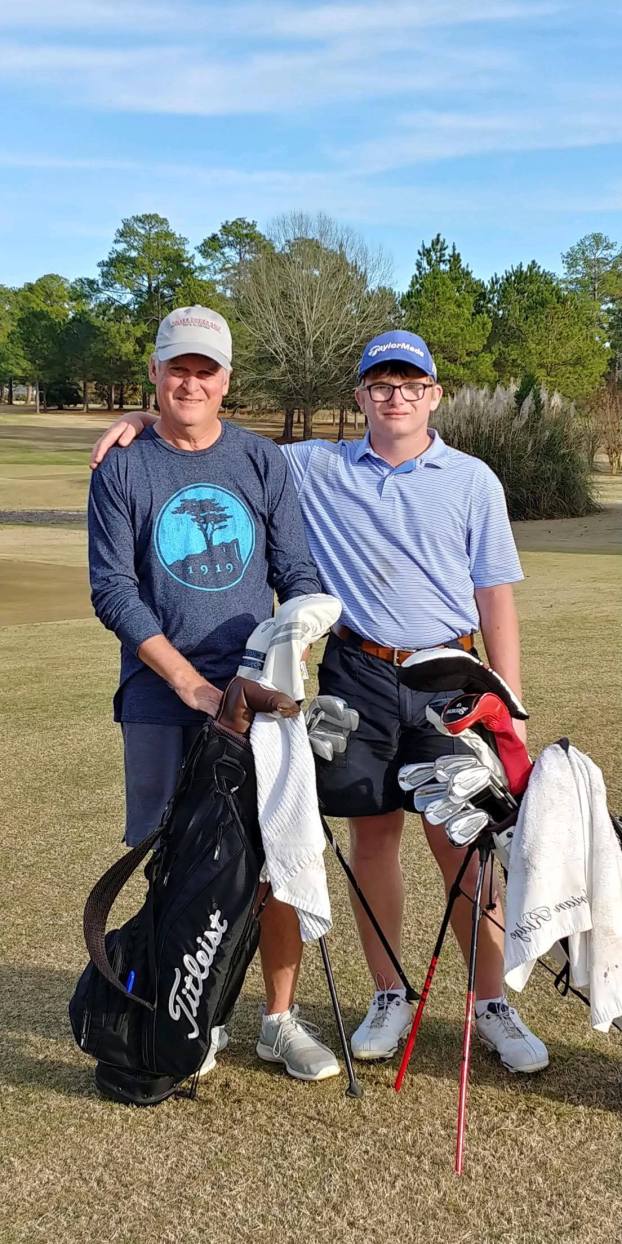 Submitted photo Collin McCrary (left) enjoying a nice around of golf with his son Griffin McCrary in December.

Sports all over the country are being shut down as a result of COVID-19, but there is still one sport that continues to thrive.

Golf has seen a recent boom in popularity during the virus and the Troy Country Club has seen the results.

Golf courses around the country are taking the proper precautions in order to keep golfers safe and healthy.

While some courses are taking precautions that include everything from taking out flag sticks and flipping the cups on each hole, the Troy Country Club cleans golf carts and limiting the number of people in the club house.

“We allow just one person in the clubhouse at a time and they can only take on step into the golf shop,” said Troy County Club Golf Professional Tony Mitchell. “There is only one person to a cart and we disinfect every cart. The flags sticks remain in, people are not allowed to touch the sticks.”

The demand for tee times has increased to the point that Mitchell is forced to spread out the start times on a daily basis.

“We have a lot of people playing,” Mitchell said. “We are trying our best to spread out the tee times. They are doing a very good job at it.”

Former Troy Trojan golfer and a current member of NBC Golf Collin McCreary credits the country club for keeping the course and the facility safe.

“The staff and Troy Country Club is having to work extra hard right now,” McCreary said. “Tony Mitchell and the staff are working extra hard to keep everyone safe. They are doing a great job.”

McCreary has played a lot of golf over the years, but has played even more recently during the virus.

“I have almost played every day during the crises,” McCreary said. “Right before dark I go walk a few holes. It’s good therapy and exercise. It’s one of the few sports you can play and not come in contact with other people.”

Golf is not only booming locally, but in states where it is still allowed, golf is taking off.

“A friend of mine is a golf pro down in Florida,” McCreary said. “Their club usually averages 700 to 800 rounds a month. They did 3,500 rounds in March. Multiple that by cart and green fees, golf courses are making up some ground. The boom during this crisis has helped some of these courses stay afloat.”

With some states limiting the amount of golf, McCreary hopes local players will continue to play responsibly to ensure that Alabama courses remain open.

“There have been some courses down in South Florida where there have been some large groups that went out to play,” McCreary said. “They congregated as a group and it caused the golf course to shut down. People have to obey the rules. People can go out and play golf, but don’t’ congregate.”

The game of golf has provided people an opportunity to get out of the house and enjoy a safe time outdoors.

“I’m glad people have something to do,” Mitchell said. “There is nothing else to do. I hope we can stay open.”