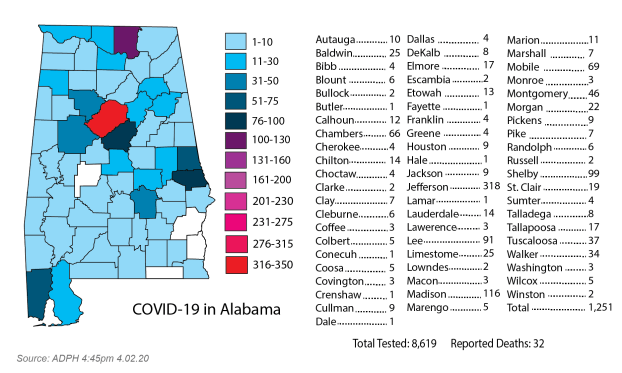 With seven confirmed cases of COVID-19 in Pike County, many residents are asking about the context of those cases: are they travel-related? Are the individuals in public-facing jobs? Could I have been exposed?

And those are all questions that local officials cannot answer.

“We don’t have that information from the Alabama Department of Public Health,” said Herbert Reeves, Pike County EMA director. “And I asked the same question when I talked to the ADPH representative. She said: ‘they need to treat everybody they come in contact with as if they are a carrier of the virus.’”

And everybody, Reeves said, means everyone.

“So many people that are carriers of the virus are asymptomatic,” he said. “You have to assume everyone has it.”

Local officials have been sharing a repeated message of social distancing, personal protection and staying home as much as possible in an effort to contain the spread of the COVID-19 coronavirus.

“Right now we only have seven confirmed cases,” Reeves said Thursday. “But if you look at the 10-county region of Division B, which we’re a part of, we’re second behind Houston count in number of cases.”

And, officials say those numbers most likely will increase.

“We’ve conducted about 175 tests and are still waiting on results for about a third of those,” said Amy Minor, chief clinical officer at Troy Regional Medical Center. This hospital is one of five collection sites in the county. The others include Southeast Alabama Rural Health Associates, Dr. Phylecia Cheatam’s office, Ivy Creek Family Medicine and Charles Henderson Health Care.

“We’re not having any significant peak in patients who are sick enough to be hospitalized yet,” Minor said.

Statewide, the ADPH reported 1,265 confirmed cases of COVID-19 on Thursday, with 8,619 individuals tested and 17 deaths confirmed.

Reeves said following social distancing measures outlined by the state health department – keep six feet apart, no gatherings of 10 or more people, avoid social gatherings, make trips outside your home only for necessities – are critical to helping contain the spread.

“Most experts say if we can do that keep people in place, we can keep our numbers down significantly,” Reeve said.

“I know a lot of people are calling for a shelter-in-place and calling on our governor to issue that,” Reeves said. “Right now, we don’t have anything in place but if that order does come we will do so by following the guidance of the state and the ADPH.”