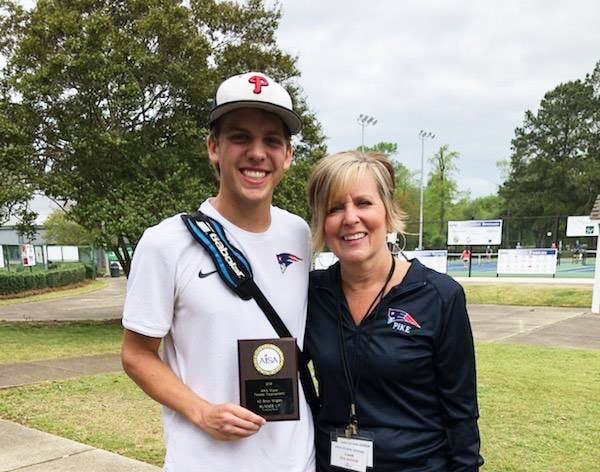 This time last season, Pike Liberal Arts tennis player Eli Grice was working his way to a berth in the AISA State Championship. A year later, Grice and the rest of the Patriots are trying to fill the void after being told tennis has been suspended.

The Patriots had just one match under their belt when they got news that the season was being suspended due to the coronavirus.

“At first it was like I get some time out of school,” Grice said. “Now it’s like, after the excitement wears off, I realize I’m not going to have the run of the mill senior experience. It’s completely different.”

After being knocked out in the opening round in 2018, Grice finished runner-up in the state last season and had his sites on taking another step by winning the state championship in 2020.

“I was really confident going into this year because I was planning on making another good run at it,” Grice said. “I played just one match this year and now everything has stopped. Seeing that this opportunity might go away and that last year might be my last chance to win it all is disappointing.”

Although the Patriots had just one match before the suspension, they were scheduled for a total of four, but poor weather caused those matches to be canceled. Even in their one match, Grice saw plenty of potential in himself and his team.

“Our potential was really high,” Grice said. “Our team was looking good. We are mostly seniors. We did really well in our one match. We were rusty, but did well. It was looking exciting and now it’s gone.”

Grice and the Patriots are not allowed to get together as team, but he is able to get hit the ball around and get in a little work with friends.

“I have played by myself and with a couple of friends,” Grice said. “It can’t be an official practice. It’s us hitting the ball back and forth.”

Although Grice is hopeful to get back on the tennis court in an official capacity, he isn’t feeling too confident.

“I’m not sure if we are done yet,” Grice said. “It’s disappointing, but I guess there is a little glimmer of hope that we will be able to finish it out.”

The Troy softball team had one of their better starts in program history in 2020. Their starting pitcher was one... read more