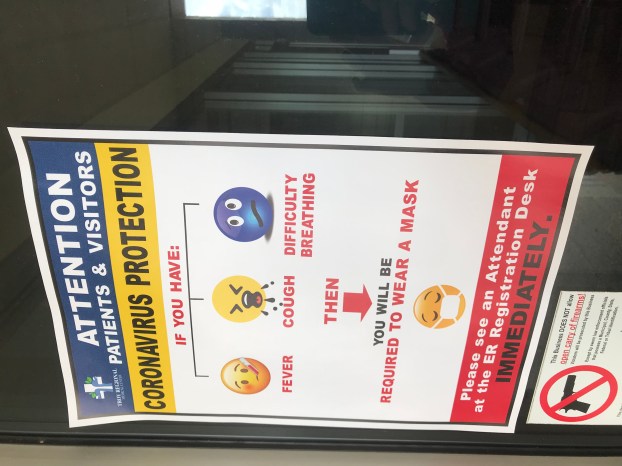 Messenger photo/Mike Hensley A sign at Troy Regional Medical Center provides prospective patients and visitors about regulations in place to respond to the spread of the coronavirus. Although no cases have been identified in Pike County, state officials on Friday confirmed at least two cases of the virus with several suspected cases.

Alabama Gov. Kay Ivey declared a state of emergency Friday and closed public schools for two-and-a-half weeks as the state reported its first cases of coronavirus.

Ivey said all K-12 public schools will close after March 18 for at least a two-and-a-half-week break. Some schools were on spring break during part of this time.

“Folks, let’s take a common-sense approach and remember calm and steady win the race,” Ivey said in a news conference. “Alabamians should not be fearful but instead use common sense to watch out for ourselves and others.”

In Pike County, school officials already had canceled sports, assemblies and travel for faculty and staff.

Dr. Mark Bazzell, superintendent of Pike County Schools, said Friday his staff had been working with the 100-plus dual-enrollment students affected by the cancellation of on-campus classes at Troy University.

“We’re working to make sure they have access to computer labs and laptop computers, if needed, so they can complete their coursework,” he said.

Bazzell also said he would be meeting with senior leadership in the district on Monday morning to further outline plans and would communicate with parents, faculty and students after that meeting. Students are scheduled to return from spring break on Monday.

At Troy City Schools, interim superintendent Cynthia Thomas said the district would follow the lead of the state department of education.

State Health Officer Scott Harris said the state now has at least two cases of coronavirus. He said there are preliminary reports of three additional cases in the state.

“This is a very fast-moving situation. We are not surprised to have additional cases,” Harris said.

The first Alabama case was found in a resident in Montgomery County. The second was in Jefferson County.

Superintendent Eric Mackey said they tried to give parents notice of the school closings so parents could make childcare arrangements. The schools will not have to make up those days since a state of emergency has been declared, Mackey said. Private schools will make their own decisions about closures.

The Alabama Department of Public Health recommended that people cancel or avoid large public gatherings with more than 500 people. Harris also said people should stay about 6 feet (1.8 meters) apart from others in public and to “please stay home if you are sick.”

Alabama was one of the last states to report a case. The state lab began testing last week, Harris said.

State labs as of Thursday had only tested about 50 people for coronavirus, all of which were previously negative.

Harris said testing at the state lab was initially limited to priority cases where people were considered most at risk because of travel to another country or because they were seriously ill. He said testing criteria has now been liberalized and the state will test a person when a doctor recommends it. Private labs are also doing testing, he said.

“As we ramp up our testing capacity, we are starting to find these cases just like surrounding states,” Harris said.

The Department of Public Health is establishing a call center beginning Saturday morning for people to get information about testing and whether should seek it. The number is 1-888-264-2256.

To try to limit the spread of the virus, cities and counties rushed to cancel public events, and large universities announced a temporary switch to online classes.

Alabama Secretary of State John Merrill said the March 31 primary runoff will go on as planned. His office announced Friday that “voters who are concerned about contracting or spreading an illness or have an infirmity may vote by absentee.” The deadline to apply for an absentee ballot is March 26.

Alabama law requires absentee voters to affirm that they are sick, out of town, working a long shift or infirm when they request a absentee. Merrill said Friday that voters “should list the reason that they feel is appropriate for them.”

For most people, the new coronavirus causes only mild or moderate symptoms, such as fever and cough. For some, especially older adults and people with existing health problems, it can cause more severe illness, including pneumonia.

The vast majority of people recover from the new virus. According to the World Health Organization, people with mild illness recover in about two weeks, while those with more severe illness may take three to six weeks to recover. More than 5,000 deaths worldwide have been attributed to the virus.

RYLA is an acronym that is, perhaps, not as familiar as SEC or LOL but is it one that is... read more