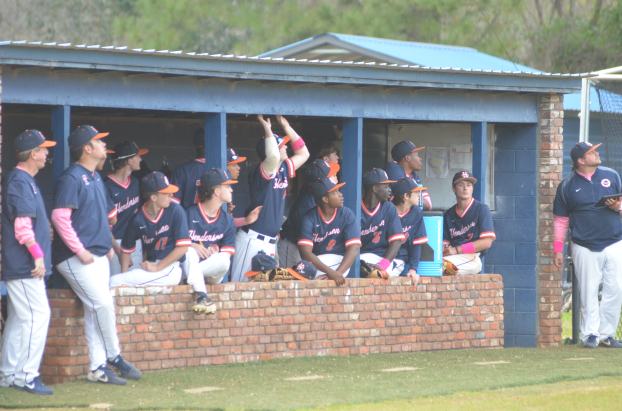 The Charles Henderson Trojans scored three runs in both the first and second inning in their 13-3 win over the Opp Bobcats on Tuesday afternoon at Terry Sikes Field at Hogan’s Hole in Troy.

Adrian Cardwell got the start for the Trojans on Tuesday afternoon.

A first inning home run by Cole McWhorter highlighted Troy’s first three-run inning. By the end of the second inning, Charles Henderson had a 6-0 lead.

Before McWhorter’s home run in the first,  Bailey Sparrow drove in the first run on a sacrifice fly to center field. Following the home run, Caden Bryan doubled to drive in Ben Reeves to bring the score to 3-0.

Cardwell began the second inning with a double. Mario Davenport stepped up the plate and tripled, giving the Trojans a 4-0 lead. Cam Foley brought in Davenport for Charles Henderson’s fifth run. J.B. Sanders scored the final run of the inning on an error.

The offense went back to work in the third inning when they plated four more runs to go up 10-0.

Caden Bryan reached base after he was hit by a pitch to start the inning. He later came around to score on an error by Bobcat catcher Cody Walsh. Two straight Trojan batters reached via the walk to load the bases. Sanders was then walked to bring in another Trojan run. Following a fly out, Bailey Sparrow hit a two-run single that drove in Davenport and Jaylen Deveridge.

Opp scored all three of their runs in the top half of the fourth inning.

After being held off the scoreboard in the fourth inning, the Trojans ended the game with three runs in the fifth to secure the 10-run mercy rule. Deveridge came around to score on a McWhorter single, Reeves drove in Sanders with a sacrifice fly and Sparrow came around to score the game’s final run on a wild pitch.

The Trojans will be back in action on Thursday when they travel to Rehobeth to take on the Rebels beginning at 5 p.m.