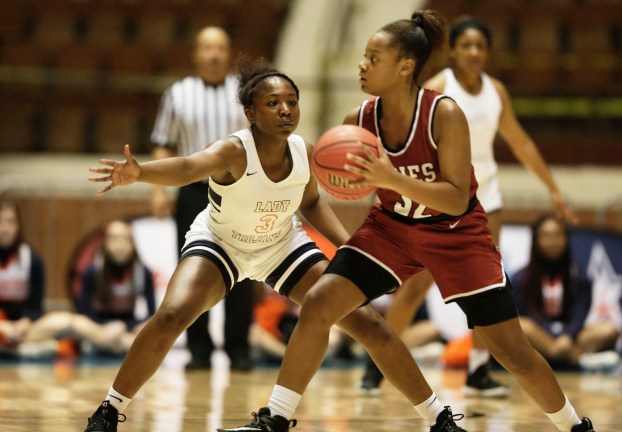 Lady Trojans return to the Final Four against Center Point

For the first time since winning the state championship in 2018, the Charles Henderson Lady Trojans are heading back to Birmingham to take on Center Point in the AHSAA Class 5A semifinals on Wednesday afternoon.

The Trojans revenged last year’s loss in regionals when they knocked off Ramsay in the regional semifinals. After knocking off Sylacauga, the Trojans are back in Birmingham.

“We are ready,” head coach Dyneshia Jones. “We are all prepared for what he have ahead of us. We are taking it one game at a time, but we are ready, anxious and ready to play.”

Winning the games in Montgomery the way they did, Jones learned a lot about her team.

“They set their mines on it, they can do anything,” Jones said. “They never looked dazed. It was all about revenge from last season.”

After getting their win over Ramsay, the Trojans needed to refocus for their game against Sylacauga.

“It took a lot,” Jones said. “I know what type of team (Sylacauga) they had. They were there for a reason. Anything can happen. They weren’t a great shooting team, but they could have made some.”

The Trojans have three players on this year’s roster in Niaira Jones, Samira Moore and Mykyia Milton that were on the team the last time the Trojans played in Birmingham. Although the environment is bigger, according to Jones its just like any other basketball court.

“We have three of them that have been there more than once,” Jones said. “They are going to tell the players that the court is the same size. The surroundings make it look bigger, but I think they will be prepared.”

“When we played them they had two players that did not play,” Jones said. “She is one of my closest friends. We went to junior college together and we send text messages. I congratulated her even though we are going to have to play each other.”

The Eagles entered the postseason as the Class 5A Area 10 winner. So far they have wins in the tournament over Alexandria, Brewer and Boaz.

At the end of the season, Jones will have to say goodbye to three seniors in Moore, Milton and her daughter Niaira Jones. Until then coach Jones plans on enjoying every last moment she gets with her seniors.

“It brings tears to my eyes just thinking about it,” Jones said. “Of course I have my girl on the team, but you have the other ones. I’m saying to myself there are no more weeks after this. Sunday was the last Sunday we are going to be in the gym practicing. I have been thinking about it, but we have to get past this point. They are going to go on and do great things in life. We are fortunate to make this far. Hopefully we are going to continue and keep going.” X

The Pike County Bulldogs are heading to their first ever state championship game after they knocked off Hanceville 52-42 on... read more