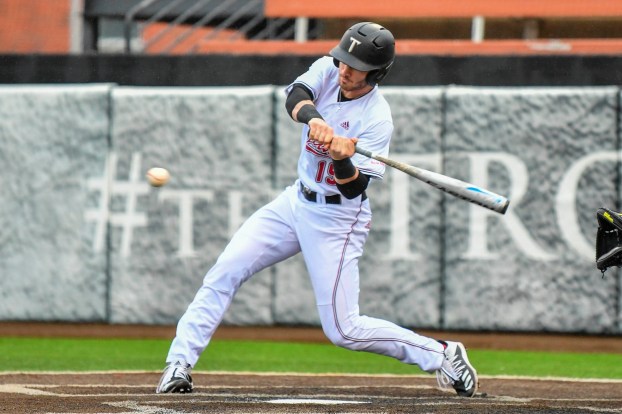 Photo/Troy Athletics Dalton Sinquefield takes a swing for the Trojans.

Trojans look ahead to series against Louisiana Tech

The Troy Trojans overcame a four-run deficit in their 14-5 win over Jackson State on Wednesday night in Troy.

The win for the Trojans preserved their undefeated start to the season. Now, they turn their sites to Louisiana Tech.

The Trojans (5-0) fell behind 5-1 heading into the bottom of the fourth inning after allowing five runs in the third inning.

Troy scored three runs in the bottom of the fourth inning to pull to within one run at 5-4. The Trojans scored 13 runs in the final five innings to close out the win.

After getting 2.2 innings out of Dalton Wilder, the Trojans had six pitchers come out of the bullpen, including Ryan Fultz, who earned the win after pitching a scoreless inning.

“The key to tonight’s win was the pitching out of the bullpen, it was terrific,” head coach Mark Smartt said after the win. “To get six and a third scoreless innings out of the pen, that allowed our offense to get back in the game. We have a good lineup and there aren’t a lot of cracks in it. (Opposing pitchers) have to throw good pitches to get these kids out.”

Troy finished with 13 hits, nine of which were for extra bases. Sophomore Logan Cerny hit a solo home run that went for 398 feet. It was his second of the year.

Now the Trojans turn their attention to their second series of the season. They will host Louisiana Tech in a three-game series starting this evening at Riddle-Pace Field.

The Bulldogs come into the contest undefeated at 4-0. They have two wins against Sun Belt Conference foe Louisiana-Lafayette. They also have wins against Southeastern Louisiana and McNeese State. After scoring a total of four runs in their first two games, the Bulldogs have totaled 17 in their last two.

Troy and Louisiana Tech have only met three times. All three of those games came last year in Ruston. The Trojans won the series 2-1.

“It’ll be a very good series,” Smartt said. “That’s a good ball club coming into town. They’ve gotten off to an excellent start and are a regional-type team every year. We were fortunate to win two out of three last year in Ruston and we’ll have our hands full again this year.”

The Trojans have scored in double figures in all five games this season. It marks the first time since 2006 that the Trojans have done that in five consecutive games.

The Trojans entered Thursday leading the country in runs scored with 81, six more than second most Texas A&M.

As a team the Trojans are second in the country with a .421 batting average. Troy also leads the nation in doubles with 29, seven more than Auburn who comes in second with 22.

Levi Thomas is set to pitch game one for the Trojans. Thomas in his first start of the season pitched five innings to earn the win. 14 of his 15 outs came by way of the strikeout.