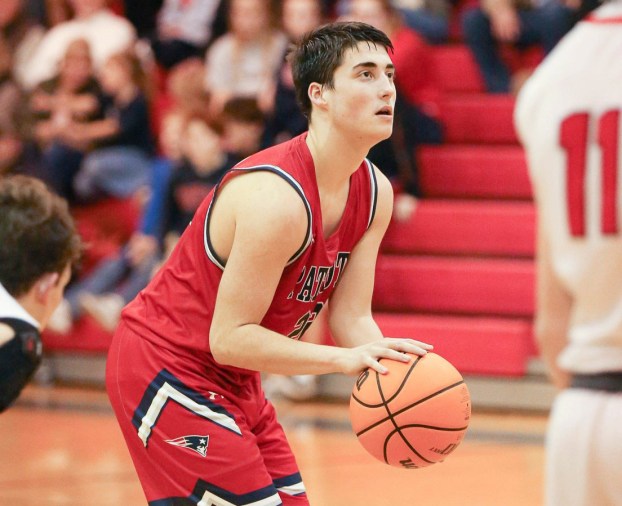 Submitted photo/Candace Nelson Pike Liberal Arts Patriot Nick O’Brien lines up for a free throw in a game earlier this season. O’Brien will be playing basketball at Troy University next season.

Pike Liberal Arts Senior Nick O’Brien is taking his basketball talents to the next level. Earlier this week, the senior announced he is heading to Troy University and will play basketball as a preferred walk-on.

O’Brien, who is currently practicing for the state tournament, which is set to begin next week, will play under head coach Scott Cross and join another Troy native Jalen Tuck on the Troy roster next season.

O’Brien has been part of the basketball team the past few years and each year he has continued to progress and fine tune his game.

“I have really worked on my form and my shot,” O’Brien said. “I am getting better and better. I have been playing hard, gritty and tough.”

O’brien is one of the leaders on this year’s team. After last season’s run to the Final Four, the Patriots said goodbye to seniors Jade Sikes, Cody Hollis and Max Copeland.

“It’s very important to be a leader,” O’Brien said. “We did lose a lot, but we also brought back a lot. We still have Drew (Nelson) and Javon (Christian) who were starters. We are bringing back the key core of the team.”

O’Brien and the Patriots are set to begin the postseason. O’Brien believes there are still some things he needs to do to get better before arriving on campus at Troy.

“Ball handling and continuing to work on my shot,” O’Brien said. “I just need to keep working hard.”