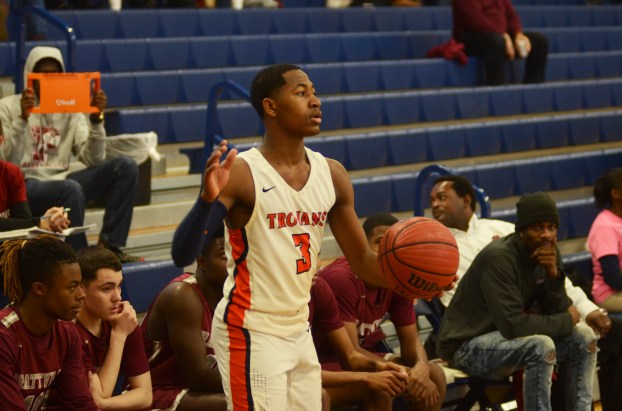 Akieves Shorts looks for an open teammate during Charles Henderson’s game against Prattville on Tuesday afternoon.

Trojans fall at the buzzer to 7A Prattville

Charles Henderson was tied with Prattville with just eight seconds remaining on Tuesday afternoon, but a 3-point make at the buzzer by Joshua Shannep gave the Lions a 67-64 win over the Trojans in an afternoon thriller.

The Trojans led throughout much of the game on Tuesday, but allowed a lengthy run to begin the fourth quarter and ultimately lost the lead and the game.

The loss drops the Trojans to 12-12 on the season. The Trojans have fallen at the buzzer in three out of their last four games.

The Prattville Lions jumped out to an early 10-5 advantage in the early minutes of the first quarter. The Trojans then embarked on a 12-0 run to give them a seven-point advantage at 17-10. Akieves Shorts and Zach Henderson each had four points during the run. The Trojans went into the second quarter holding a 17-14 lead.

The Trojans lead never got above five in the second quarter. Keith Wheeler scored five points in the quarter and the Trojans went into the locker room at halftime leading by one at 33-32. Wheeler and Akieves both finished the half with five points.

Wheeler added eight more points in the third quarter. The Trojans led throughout and went into the final quarter holding a seven-point lead at 54-47.

A three-point play by the Lions early in the fourth quarter gave them a 56-54 lead. It was their first lead since they led 10-9 in the first quarter.

The Lions took that lead at the tail end of a 9-0 run.

The Trojans tied the game with a three-point play of their own. The teams battled back and forth the rest of the quarter. With the Trojans trailing by two with 17 seconds remaining, Wheeler tied the game on a layup. A foul was called and he went to the line with a chance to take a lead with eight seconds remaining. Wheeler missed the free throw and Shannep of Prattville sunk the three as time expired to secure the Lion win.

The Trojans will be back in action on Friday when they resume area play on the road against Rehobeth.

Lady Trojans run away with an 86-12 win over Prattville

Despite a running clock in the fourth quarter, the No. 1 Charles Henderson Lady Trojans flirted with the century mark... read more