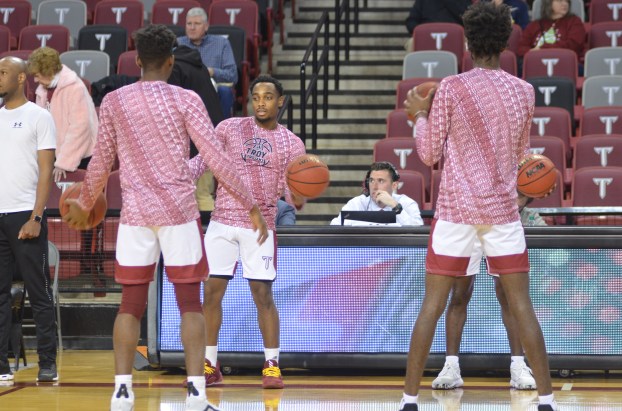 Messenger Photo/Mike Hensley The Troy Trojans warm up prior to their game against Coastal Carolina on Thursday night in Troy.

Trojans look to go 2-0 in conference play against App. State

The Troy Trojans began Sun Belt Conference play with a win over Coastal Carolina on Thursday night. They look to make it two-in-a-row on Saturday when they host Appalachian State at Trojan Arena.

“This was the best we’ve defended the 3-point line all year, so I’m proud of our guys for that,” head coach Scott Cross said after the game. “They played hard and communicated and played with intensity. This was an all-around good team win. I cannot as a coach ask for more from our guys than we received tonight.”

The Trojans now shift their attention to a Mountaineers team coming off an 81-71 win over South Alabama in their conference opener on Thursday evening. The Mountaineers come into the game with a 7-4 record on the year.

Justin Forrest scored 32 points in the win over the Jaguars. Forrest leads the Mountaineers, averaging 17 points per game.

The Trojans split their games against Appalachian State last season. They beat the Mountaineers at home 89-85.

Saturday’s tip-off is scheduled for 2 p.m.