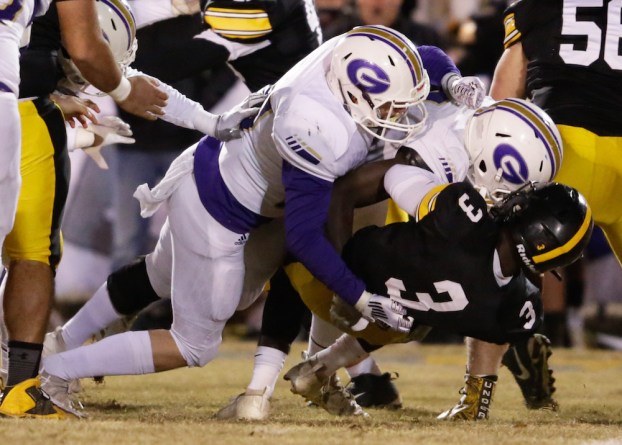 Photo/Dan Smith The Goshen Eagles will move up to Class 3A beginning in 2020.

Goshen moving up to Class 3A beginning in 2020

The Alabama High School Athletic Association is shaking things up heading into next football season.

Just weeks after the 2019 football season came to a close the AHSAA announced conference and region realignment on Tuesday.

The biggest change locally will be at Goshen High School. The Eagles spent the last eight seasons in Class 2A Region 3, but beginning in 2020 the Goshen Eagles will move up to compete in Class 3A Region 4.

The Eagles will be joined by a familiar team as the their cross-county rivals Pike County will also share Region 4 with the Eagles. As will Beulah, Dadeville, Montgomery Catholic, Reeltown and Trinity Presbyterian.

Although the Eagles are excited about the opportunity, it won’t come without some challenges.

Reeltown, like Goshen makes the move up from 2A to 3A next football season.

The Bulldogs have had success in their region over the last few seasons. The Bulldogs, playing in Class 3A Region 2 the last two seasons, went undefeated in region play in both seasons.

The Bulldogs and Eagles last met in 2017 when the Bulldogs defeated the Eagles 24-14.

The Charles Henderson Trojans will remain in Class 5A Region 2, but they will be joined by some new teams. The region will include Andalusia, Carroll, Greenville, Headland, Pike Road and Rehobeth.

Ariton and Zion Chapel will make up Class 2A Region 2 along with Abbeville, Cottonwood, Elba, Geneva County, Houston County and G.W. Long.

The 2020 volleyball will also have a new look next season. The Eagles will also move up to Class 3A where they will be a part of Area 4 along with New Brockton, Opp and Pike County.

Charles Henderson will be in Class 5A Area 4 along with Andalusia and Greenville.

Ariton and Zion Chapel will be in Class 2A Area 3 with Elba and G.W. Long.

Reclassification is done every two seasons and it is based on average daily enrollment numbers. This newest alignment puts the 32 largest schools in the state in Class 7A. The remaining six classes are divided into the sixth remaining classes.

In December, 1963, the Four Seasons sang “Oh, What a Night.”  Nearly 50 years later, those who attended the Shelia... read more