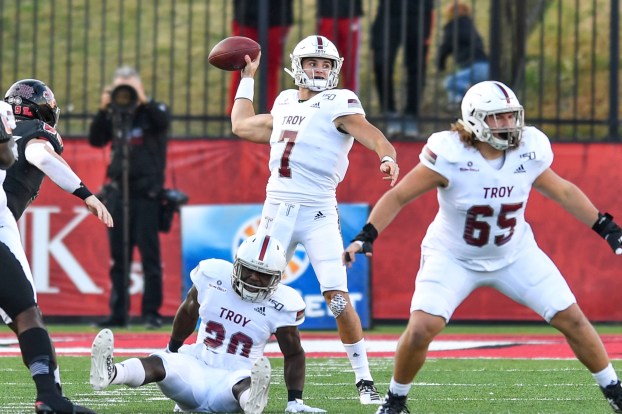 Photo/Troy Athletics Troy quarterback Kaleb Barker gets ready to throw a pass for the Trojans in a game against Louisiana on Saturday afternoon. The Trojans return home for one final game against Appalachian State on Friday.

The Troy Trojans fell to Louisiana 53-3 on Saturday afternoon, leaving them one win shy of bowl eligibility with one game remaining on the schedule.

Sitting at 5-5 on the year, the Trojans must now beat Appalachian State in the season finale on Friday afternoon at Veterans Memorial Stadium.

The Trojans allowed 598 total yards of offense. The loss for the Trojans snapped a two-game winning streak.

“I was very disappointed in our performance last Saturday,” head coach Chip Lindsey said. “You have to give Louisiana credit, they have a good football team, but we didn’t do anything to help ourselves the other night. We were outcoached and outplayed in all three phases of the game and it’s unacceptable. We’re not going to accept that kind of effort here at Troy.”

The 53 points allowed was the most since Troy fell to Boise State in the season opener 56-20 last season. It’s the most points allowed in a conference game since they lost to Appalachian State 53-14 in 2014.

The Trojans entered the game with numerous injures on defense, but defensive coordinator Brandon Hall was quick to point out that he is not using that as an excuse.

“I know Troy has a lot of pride,” Hall said. “Trust me, if anybody knows about the expectations, it’s me. It hurt. I’m embarrassed. I’m embarrassed for our university and our football team. It’s not anything they’ve done. I just know the expectations. We’ll get it fixed. We have to. That’s our job as coaches. There are no excuses. We have the facilities and support to do that.”

The Trojans came into the game breaking the 30-point threshold in five-straight games. Troy’s three points was the lowest point total since they scored three points in a 35-3 loss at home to Arkansas State on November 17, 2016.

“The whole rhythm was off and when we’d make a play, we’d have a penalty or turn it over,” Lindsey said. “We hadn’t done that all year, even at Missouri.”

The Trojans will have an opportunity to bounce back on short rest when they take on No. 22 Appalachian State on Friday night.

“That game was uncharacteristic of our team,” Lindsey said. “I hope we never have to deal with that again. The reality is that we’re playing another really good team and if you don’t play well, that’s what good teams can do to you.”

A win for the Trojans would make them bowl eligible for the fourth consecutive season. The Trojan players, especially the seniors, are hoping to end their season on a high note.

“The whole team knows that this is our last chance to get into a bowl game,” offensive lineman Tristan Crowder said. “We have nothing to lose so I believe the whole team will give everything we got. Fight to the bitter end and get to that bowl game.”

A win on Friday would not only put Troy in a position to go to a bowl game, but to head into the offseason with some momentum.

“Winning this game on Friday is important for a number of reasons,” Lindsey said. “First of all, a win would give us the opportunity to make a bowl game, which would allow us to get the offseason started correctly. Then you have an added storyline of it being our seniors’ last home game here at the Vet and you’d love to send those guys out the right way.”

The Troy Trojans look to secure bowl eligibility on Saturday when they hit the road to Lafayette to take on... read more