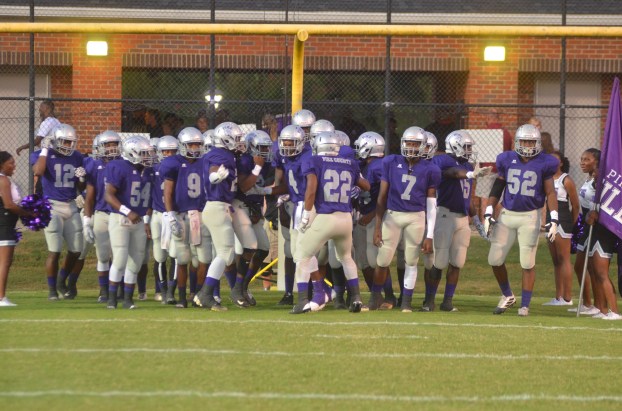 “It’s good,” head coach Fred Holland said. “We made a couple of mistakes, but bounced back. We had some good stops and made some good runs. They (Sweet Water) are tough as nails and a good football team. It is a good motivating factor going into the playoffs knowing how tough it is.”

Big plays helped lead the Bulldogs in the game. All four of their touchdowns went for runs of over 50 yards.

“It’s something we work on,” Holland said. “We did a good job hitting our holes. The line did a good job of blocking. We are starting to have some big plays and getting some momentum

The win gives the Bulldogs their first undefeated regular season since 2009.

“It feels pretty good,” Holland said. “We take it game by game. We just happen to be undefeated thanks to the good lord. I’m proud of the kids. It’s something to be proud of.”

After holding Sweeter Water off the scoreboard in their first drive, it took the Bulldogs just two players to jump on the scoreboard. Rayshawn Reynolds took a handoff and scampered in for a 79-yard touchdown.

The Bulldogs doubled their lead to 12-0 on their next possession when Junior Myhand took a handoff 73 yards for the score. The Bulldogs took a  12-0 lead into the second quarter.

Sweet Water had their longest drive of the game to begin the second quarter. They took their drive 87 yards on 14 plays, ending with a two-yard touchdown run to bring the score to 18-7 with 5:56 remaining in the first half.

Junior Myhand closed out the first half scoring with his second touchdown of the game, this time from 50 yards out to bring the score to 18-7.

Possessions came at a premium in the third quarter as each team’s offense touched the ball once.

Junior Myhand picked up his third touchdown of the game on a 54-yard run to give the Bulldogs a comfortable 18-point advantage midway through the fourth quarter at 25-7, to put the game out of reach.

The Bulldogs will open up the postseason next Friday night when they host T.R. Miller at Bulldogs Stadium in Brundidge.

Halloween was celebrated all across Pike County on Wednesday. From a Halloween party at Troy Health and Rehab, to trick... read more