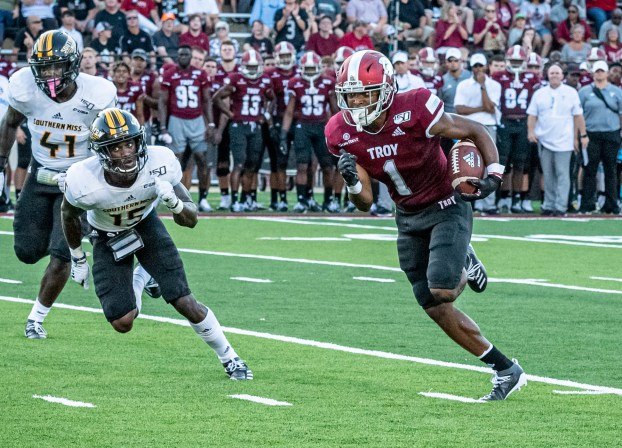 Messenger Photo/ Kaylon Geiger catches and runs with the football against Southern Mississippi earlier this month.

Junior college transfer Kaylon Geiger broke the century mark once again in Troy’s loss to Arkansas State. It marked the third time in four games that Geiger has accomplished the feat.

Geiger went the junior college route and attended Navarro College after not receiving an offer from a four-year college. On Saturday, the junior receiver continued to make his presence known to teammates, coaches and opposing teams when he hauled in eight catches for 111 yards and one touchdown.

“He’s special,” Troy offensive lineman Kirk Kelley said. “The things you see him do every Saturday is the same thing he does in practice and the same things he has done since the spring. He’s hungry and he works all the time. It just shows. He is just a special athlete.”

In the first four games of the season, Geiger has 26 total catches and has amassed 388 yards and two touchdowns.

“I thought he had a chance to be really explosive,” Troy head coach Chip Lindsey said. “When you watch his junior college film, you see it immediately, just like you guys do here. The one thing I probably didn’t realize, he’s a very competitive guy. He competes for the ball. If you notice, obviously, he makes contested catches, probably catches the ball with his hands as well as anybody.”

Geiger was one of at least three receivers brought in to replace the production left behind from Deondre Douglas and Damion Harris.

“We knew he’d be explosive,” Lindsey said. “Obviously, with what we lost last year from a production standpoint at wideout, he and Reggie (Todd) and Khalil (McClain), those were critical pieces to get in place.”

Although he produces on the field, Geiger is a quiet leader off the field, one who spends time working on one of his hobbies.

“He’s an interesting guy,” Lindsey said. “He’s intelligent. He’s pretty artistic, developing shoes and that nature. He’s not a high-maintenance guy. He doesn’t say a whole lot, just kind of studies film. He’s one of those guys who sees something one time and he can usually go out there and do it.”

Geiger believes the confidence gained in last week’s game, albeit in a loss, will help as the season progresses.