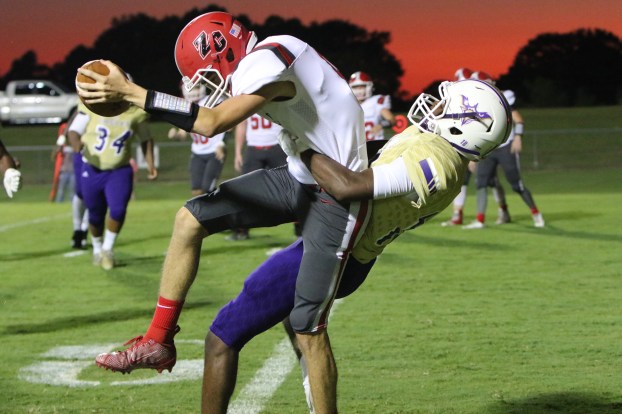 The Goshen Eagles overcame a sluggish start for the second consecutive week in their win over Samson last Friday night. This week they return home to take on rival New Brockton at Eagles Stadium.

“We just decided it was time to play,” said head coach Bart Snyder. “Samson did a good job the whole game in containing us. We were able to break some of that containment and had some long runs. Overall, we didn’t go down to play football the way we are capable of playing football. We can’t afford to do that again.”

Snyder was quick to give Samson credit for slowing his team down for the first three quarters of the game.

“Samson is a really good ball team,” Snyder said. “Very physical. Coach (Jason) Wambles has had that group ready. They played good football. We can’t allow ourselves to play at the level we did.”

The Eagles overcame plenty of adversity in the game, something that Snyder sees as a positive.

“It says a lot,” Snyder said. “We want to see how they handle adverse situations. Not only did they have to deal with being behind, but one of their teammates, Dakari Pelton, had to be carried off the field. It would have been very easy to let that get you down, but that’s not what they did. They kept their composure and they did their job.”

The Eagles had numerous players put up big numbers, perhaps none bigger than the Eagles’ 438 yards rushing, led by quarterback Bryan Galloway.Tamarcus Shipman finished with 169 yards and two touchdowns.

This week’s game brings a region rival to Goshen in the Gamecocks from New Brockton. The Gamecocks come into the game with a 1-3 record, but their first three games of the year have been anything but easy. They have played Providence Christian, Brantley and Luverne, all losses. They picked up their first win last week at home against Central Hayneville, 41-28.

“They have a good ball team with a good quarterback,” Snyder said. “They have good receivers and good kicking personnel. They are doing good.”

The Gamecocks got the better of Goshen last season when they defeated the Eagles 28-21 in a key region game.

Did you know the Statue of Liberty was a gift to the United States from the people of France? Or... read more