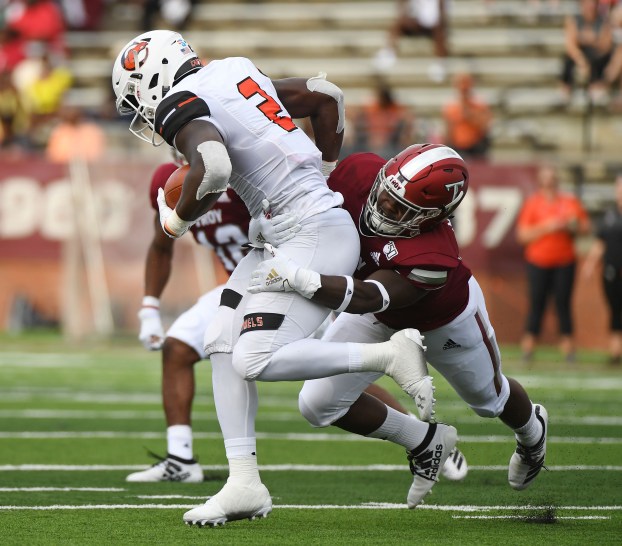 The Trojans (1-0) return from their early bye week to take on the Golden Eagles for the first time since 2016’s contest in Hattiesburg.

“I think it’s a program that is very similar to our program,” Troy head coach Chip Lindsey said. “They have a lot of great tradition and I have a lot of respect for coach Hopson and what he does.”

The Trojans knocked off Campbell 43-14 in the season opener on the final Saturday of August. During their bye week, the Trojans focused on cleaning up mistakes made in the game.

The Golden Eagles enter the week 1-1 after defeating Alcorn State in the opener and falling to Mississippi State last week.

The Eagles are led by quarterback Jack Abraham, someone very familiar to Lindsey.

“I’m familiar with him because I recruited him a bit when I was at Southern Miss.,” Lindsey said. “He’s a very smart and very accurate passer. He’s really competitive and is the sparkplug of their offense.”

Armstrong has completed 66 percent of his passes this season and has three touchdowns and three interceptions.

He’ll be throwing to a group of athletic receivers led by Jordan Mitchell, who has 13 catches for 227 yards with one touchdown.

“As far as this year goes, they have probably been the deepest (receivers),” Hall said. “They’ll have some really good receivers who can really run. Two of those guys are really, really fast. We’re going to have our hands full for sure.”

The Trojan offense combined for 527 yards in their win over Campbell. They will have a stiffer challenge this week when they go up against a defense that ranked near the top in the country a season ago.

“They have a very good defense; we have a great challenge ahead of us,” offensive coordinator Ryan Pugh said. “They’re going to be tough, physical, they fly around. They may not be the biggest defense out here, but they’re active in their front seven and their back end.”

The rivalry is a rather short one between Troy and Southern Miss as the two teams have matched up just nine times, with Southern Miss winning seven of them. The Trojans, however won their last meeting in 2016. It was a game that helped catapult the Trojans to their first 10-win season under former head coach Neal Brown.

“I think it lifted us a lot because we were coming off a year when we didn’t do so well,” offensive lineman Kirk Kelley said. “It was our first real tested win in the second year of coach Brown being here. I think it kind of pushed us to kind of go the rest of the season and just win games at a high level.”

The Troy Fire Department promoted 12 firefighters Wednesday afternoon at The Studio, honoring the first responders in front of their... read more