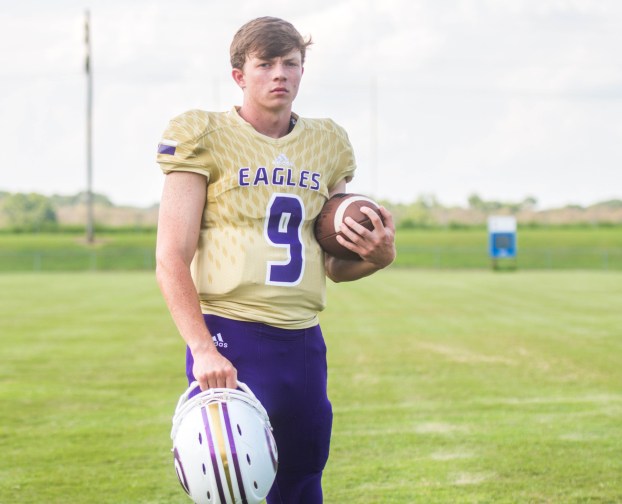 file Photo Goshen Bryan Galloway and the Eagles have started the season 2-0. Galloway threw for 171 yards and had two touchdowns in Goshen’s win over Zion Chapel last Friday night.

Quarterback Bryan Galloway and the Goshen Eagles have gotten off to a 2-0 start this season and the offense has been a big reason why.

In their 2-0 start, the Eagles are averaging 34.5 points per game and they are coming off a 48-0 win over region rival Zion Chapel last Friday night.

“Things are good,” Galloway said. “We are 2-0 right now and we’re working together as a team. We started off a little slow last week against Zion Chapel, but after that we started to work hard.”

“Things are a lot smoother than last year,” Galloway said. “Play calling has been better and the receivers are running good routs. They are fast and they are capable.”

Galloway also believes he has improved this season thanks to his coaches and his experience.

“I learned a lot from last year because it was my first year starting,” Galloway said. “I learned a lot form the coaches. I have been going to camps and I have been learning a lot. Watching film and putting in a lot of work has been teaching me a lot while getting me ready for the game.”

After last season’s 4-7 finish, Galloway believes this year’s offense has the potential to be a weapon.

Galloway has shown he can throw the ball, but he also knows he is able to tuck the ball and run when the opportunity presents itself.

“I think its fun to be able to do both,” Galloway said. “When the defense spreads out I can see the middle wide open and I know I can get to a certain yard line and get a first down. I just know I can do both.”

The Eagles will travel to take on Samson Friday night. From now until the end of the season, Galloway would like to see his team improve with each passing week.

“I just want to improve the team as a whole,” Galloway said. “Work together as a team and get better and not give up until our last game.”

The mission of the Brundidge Historical Society is to preserve and promote the cultural and physical heritage of the rural... read more