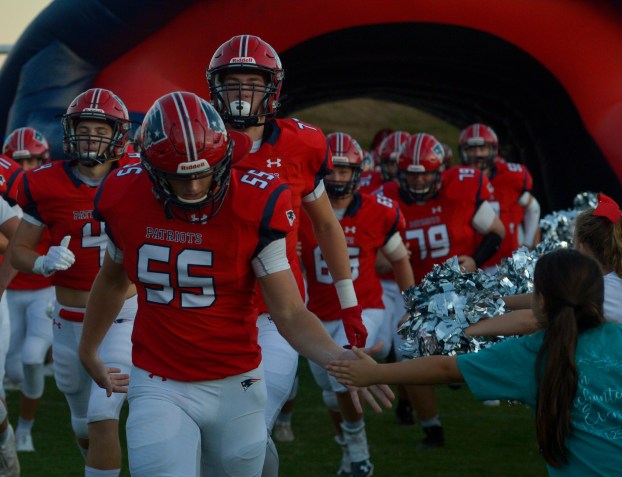 After dropping their first game of the season a week ago, the Patriots hope to get back on track this Friday night when they host Freeport.

After falling behind 12-0 to start the game, the Patriots (1-1) scored 13-unanswered points to gain the lead, only to see the Cougars score the final 15 points to secure the 27-13 win.

“We missed a lot of tackles,” said head coach Gene Allen. “We have been working on that this week. We knew Crenshaw was going to be physical. They did a really good job. They ran the clock down and made the game short. We only had the ball three times in the first half. They limited our possessions. We went down and took the lead, but they went right down the field and scored again.”

Chip Faircloth finished with 91 yards and a touchdown in Friday night’s game. Faricloth is up to 146 yards on the season with two touchdowns. He scored the game-winning touchdown in the opener and scored the Patriots’ first touchdown on Friday on a 73-yard run to begin the second half.

“He does a good job at seeing the cuts,” Allen said. “He is getting into the gaps and he has a lot of speed. When he gets free, he’s hard to catch. He gave us a couple big sparks and we’re going to have to have that the rest of the year.”

Quarterback Drew Nelson completed 11 of 18 passes for 125 yards. Nelson showed his athletic ability on occasions last week when he was able to extend plays with his legs.

“Drew is a competitor,” Allen said. “He extends the plays. One thing we have talked to the linemen about is staying on blocks. Drew is the kind of guy who extends plays and make things happen. Drew does a good job at knowing where everyone is supposed to be.”

This week the Patriots welcome the state of Florida’s Freeport Bulldogs. The two teams met a season ago with the Patriots getting the 41-28 win. The Bulldogs come into the game 2-0 after picking up a win in overtime in week one and earning a 19-7 win in game two.

“It’s a big. They have like 600 kids now,” Allen said. “They are going to run spread, but they’re going to run the Wing-T like Morgan did. Hopefully we have learned a lot from it and we can step up and stop it and make them go to spread.”