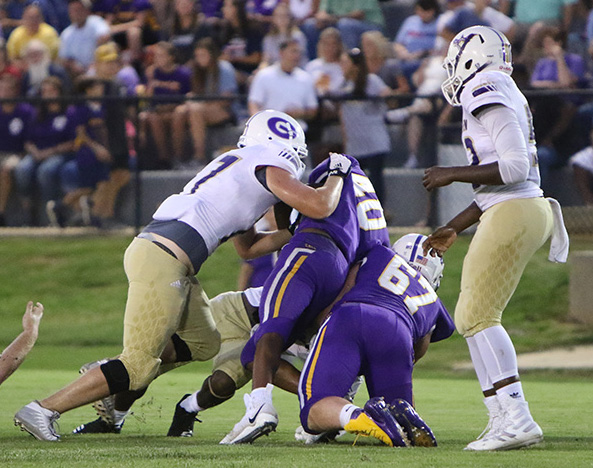 Head coach Bart Snyder went into Friday night’s game with Ariton knowing the difficult task that was awaiting the Goshen Eagles. Snyder and the Eagles knew a disciplined game was vital in order to knock off the Purple Cats; despite penalties, Snyder and the Eagles did just that in their 21-7 win over rival Ariton.

The win for the Eagles gives them a 1-0 record on the season in advance of their home opener against Zion Chapel on Friday night.

“Anytime you can go down to a place and play team with the stature of Ariton and be able to play as we did and come out with a win is big,” Snyder said. “Our guys played really well. They showed a lot of composure and they overcame adversity.”

The adversity included a touchdown being called back and the Purple Cats pulling to within six points after Goshen jumped out to a two-score lead.

“We just had to battle through some things,” Snyder said. “We had a fumble and Kamryn Baker picked it up and had an outstanding run.”

The Eagles committed 16 penalties. Even though the Eagles earned the win, Snyder knows his team will have to address the penalties heading into next week’s game.

“You can’t have (the penalties),” Snyder said. “We had four fumbles, we only lost two but those are the things we have to cut out. We have teams, that as we go, are going to get better and we have to eliminate those things ourselves to make ourselves a better ball team.”

The Eagles had five different players catch a Bryan Galloway pass on Friday night led by Dakari Pelton who finished with five catches for 79 yards with a touchdown.

“That’s always good,” Snyder said. “The more hands you get on the ball, the more difficult it becomes for defenses to put their better players on your players.”

“Bryan did a really good job,” Snyder said. “Coach Quincy and coach Brundidge have done a great job making sure everybody is doing what they are supposed to do.”

The Eagles hope the win turns into momentum heading into Friday night’s game.

“It’s always a confidence builder to win especially against somebody like Ariton,” Snyder said. “They made it to the third round and are expected to make it deep into the playoffs this year. Zion Chapel is another week and it’s another game. We have to be focused on us and eliminate the turnovers and the penalties.”

Former Troy running back Jordan Chunn has been named to Dallas Cowboys 53-man roster according to various reports. The Former... read more