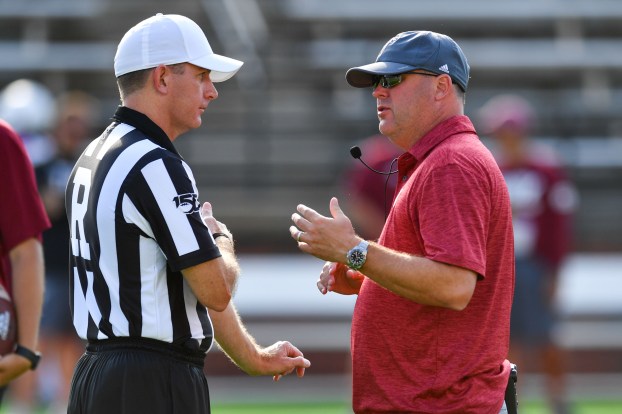 Week one of Troy’s fall football camp officially came to a close on Saturday when they hosted their first of two scrimmages at Veterans Memorial Stadium.

The Trojans split up and ran approximately 100 plays under the bright and hot sun.

“I was really excited to watch our guys scrimmage for the first time,” said head coach Chip Lindsey in front of the assembled media after the scrimmage. “It was really a controlled scrimmage, but it gave our guys the opportunity to get on the field and play in a game like situation. We were a little hit or miss on both sides, but overall I thought it was a good day and now we can reload and grade the film and be ready to go to work when we get back on Monday.”

The majority of the scrimmage featured the top string player facing off the second string. Lindsey elected to empty his bench and allow the rest of the team to practice the approximately 35 plays.

“I think we snapped the ball around 102 times when you combine all the groups,” Lindsey said. “Around 30 plus in each group is really what we were looking for.”

Saturday’s action marked the return to action for quarterback Kaleb Barker. The quarterback missed the second half of last season due to a knee injury he sustained in a game at home against Georgia State.

“At times he was pretty good and at times he made a couple bad decisions,” Lindsey said. “Overall I though Kaleb did a nice job. I need to watch film before I know more. He is a talented guy, he can throw. I think the one thing that goes unnoticed is that he has only played like five games so it’s hard, he is still seeing things for the first time. He is making really good progress.”

Backup quarter Gunnar Watson took snaps on Saturday and despite a pair of poor throws, Lindsey believes he had a good game.

“He made two throws he would like to have back,” Lindsey said. “One of them may have been sack, but I think Gunnar is continuing to grow. I thought, standing on the sideline, he did a good job.”

The scrimmage also featured a return on the defensive side of the ball. The front seven, led by Jarvis Hayes at times dominated the line of scrimmage according dot Lindsey.

“The front seven has been impressive for me,” Lindsey said. “We got Jarvis back from a shoulder and so now we have a little more depth, I was pleased with that. I though at times those guys dominated the line of scrimmage.”

The success of the defensive front highlighted a few mistakes from Troy’s offensive line.

“We were missing some guys there,” Lindsey said. “At times we were able to hit a few runs and protect pretty well, but at times we didn’t. As a head coach its an exciting day when any group makes a play and we did get going a little bit during the second half.”

The scrimmage was all about getting players meaningful playing time. For the running backs, Lindsey got a good look at all his running backs on Saturday.

“DK Billingsley, I think has a shot to be a really good player here,” Lindsey said. “I feel very confident in Jabir Frye as well as DK. We have B.J. and DK, so we go with initials around here.”

The Trojans practiced on Monday morning and will practice three more times before holding their final scrimmage of fall camp on Saturday, August 17 as part of Fan Day. The scrimmage will begin at 9:30.

A wreck that killed three people and injured four others on July 29 was caused in part by the bright... read more