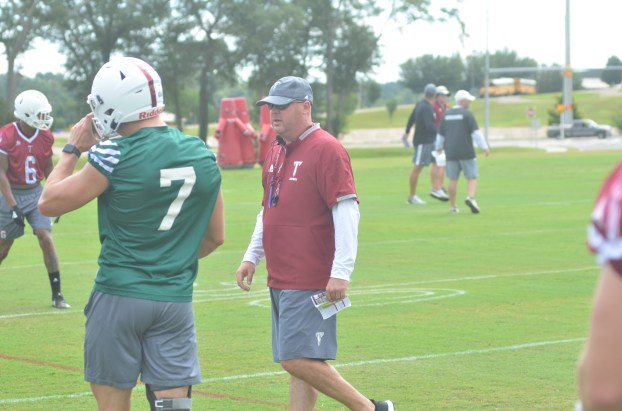 Back to work: Troy holds first practice of camp

The Troy Trojans took another step closer to the season opener on Friday morning when they began fall camp just outside of Veterans Memorial Stadium.

The Trojans held their first of 11 practices in the early morning hours on Friday. In addition to the 11 practices Troy will hold two scrimmages before officially opening the season on August 31 at home against Campbell.

“Typical first day,” said first year head coach Chip Lindsey. “Really excited to be out here. I thought the guys really flew around and we had of really good energy. At the same time, we have a lot to clean up and a lot to work on, but we have some time to do it. I thought we made it through practice fairly healthy and I think what we have to do is watch the film and learn.”

The Trojans will spend the first couple of practices out of shoulder pads. Lindsey and the coaching staff will use the time to install the playbook and then go back to the classroom to teach the players after watching film.

“The first few days you’re in helmets and no gear,” Lindsey said. “There are quick whistles. You’re not wanting guys on the ground. What we are really focusing on is effort and assignment. If we have assignments down before we get to pads, I think we have a shot.

The Trojans enter the season picked to finish in second place in the Sun Belt Eastern Division. The success of the team will be on the shoulders of quarterback Kaleb Barker. Barker returns to the team after missing the second half of last season due to a knee injury. After a limited spring, Barker is back 100 percent for fall camp.

“That was his first time in a team setting and things are different,” Lindsey said. “There are different plays than you run in 7-on-7’s. We have the first few days of camp to get him comfortable.”

Lindsey believes the offensive line will play a key role in bringing Barker up to speed.

“They’re extremely important. They’re some of the big-time leaders on the team. We have four guys coming back that have started on the offensive line. They are a hard-working group and they take pride in doing their job the right way.”

“I want to get through the base installation, which we will before the scrimmage,” Lindsey said. “I want see us go out and just execute, blocking, running the right routes, being in the right positions and having the right conversions. I think it’s just going to come down to playing clean. I think if we do that than we will have made a lot progress after scrimmage one.”

This week will feature quick whistles and as few guys on the ground as possible, in order to keep everybody healthy for the season opener.

Off the field, news broke just before the start of practice that Troy picked up former Auburn edge rusher Richard Jibunor.

“He is a great kid, with us at Auburn,” Lindsey said. “We are excited to get him here. I think he is a good addition to our team. He has to get himself into shape and ready to go. I think down the road he is going to be a really good player for us.”

The Pike Liberal Arts Patriots are back on the field preparing for what they hope is a return trip to... read more