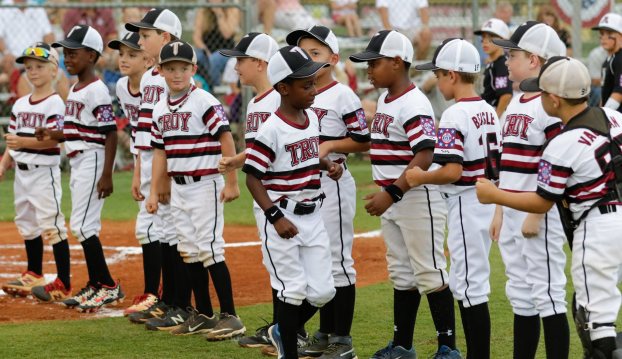 The Troy 8U team will represent the city and the state when they compete in the World Series in Ruston, Louisiana on Saturday morning. Above: Troy is introduced to the crowd.

The Troy 8U tournament team fell to North Carolina 11-7 in the opening round of the World Series on Saturday morning in Ruston Louisiana.

Troy allowed nine runs in the first three innings and could never recover.

Connor Sanders and Cole Davis both finished the game 3-3 with an RBI. Cope Russell and Ryan Copeland each finished with two hits.

Trailing 5-0 heading into the third inning, Troy evened the score with five runs of their own. Russell drove in the first run of the inning on a fielder’s choice. Troy then had three-straight doubles including two RBI doubles by Davis and Sanders. Sanders came around to score the final run of the inning on an error.

North Carolina outscored Troy 6-2 the rest of the way to secure the four-run win.

Troy will be back in action at 3:00 p.m. when they take on South Carolina.