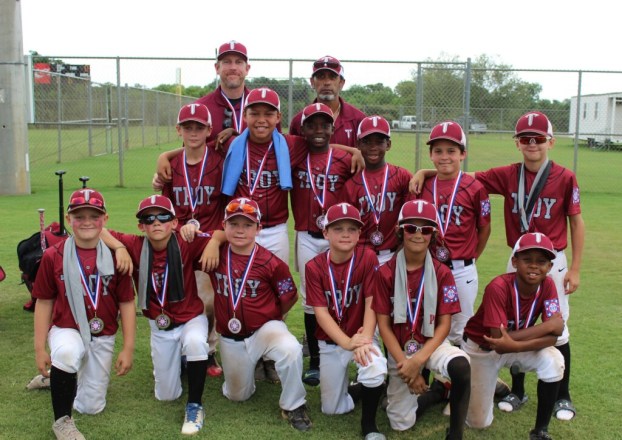 The Troy AAA Rookies entered the state tournament with more 9-year-olds then 10-year olds. Despite being on the younger side, Troy battled their way through the tournament before ultimately falling short.

“In the end, I think we exceeded everyone’s expectations,” said head coach Dr. Rick Gill. “I don’t think anyone really thought we would finish third in the entire state. We were a true rookie team. We were 9-year-old dominant.”

Despite the young players on the team, Troy did have a lot of contribution from the few 10-year-olds they did have.

“Weston Garrett at catcher caught every game and really showed endurance and leadership,” Gill said. “Will Watkins played center field but also pitched for us. He showed athletic ability and hustle. Those were the main 10’s and of course the 9-year-olds stepped up. Pierce Gill, Greyson Mathews and Grant Davis stepped up and pitched and so did Dutch Adams and Ty Hughes.”

Overall in the tournament, Troy scored 52 runs while allowing just 37.

“The problem is the runs we allowed were in our losses,” Gill said. “I think we hit well but in our two losses, I thought we left some guys on base.”

On the pitching side, Troy had plenty of contribution by Pierce Gill, Grant Davis and Mathews.

“These are kids that had never pitched before or have been on this stage,” Gill said. “They pitched like they have been doing it their whole life.”

The problem late for Troy was running out of pitchers due to the pitch limit in the tournament.

With the summer now over for the Troy AAA Rookies, Gill hopes his players will continue to work towards their goals.

“I want my kids to continue to be hungry and to continue to not be satisfied,” Gill said. “We can compete with the AUMs and Southeast Blue. The difference is we need to put more work in throughout the year, so next year we can come back and finish what we started.”

After working their way through district and the state tournament there were a lot of people that helped Troy get to where they got.

“The parents sacrificed a lot,” Gill said. “Coach Mark Smartt allowed us to use his facility when it rained. The head football coach at Charles Henderson (Brad McCoy) allowed us to us their facilities. The whole community came together to support Dixie Youth Athletics.”

By Lauren Johnson Students at Troy Universities ‘Power Up with Stem’ Camp this week enjoy learning, creating, and building. From... read more