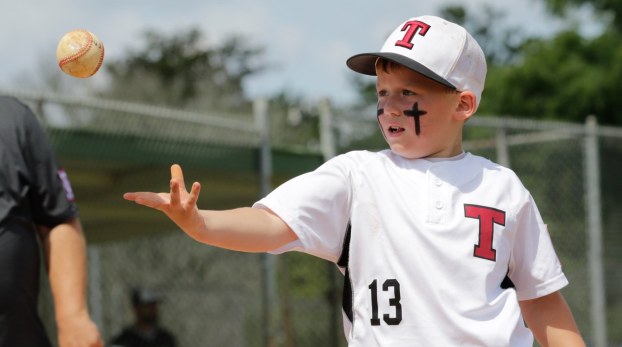 Messenger photo/dan smith The Troy 6U Tournament team will play in their home ballpark when the Troy Sportsplex hosts the 6U South State Tournament.

On to state: Troy well-represented in upcoming tournaments

The district tournaments are now in the past and the local tournament teams shift their attention to a larger stage when they begin play in the state tournament.

The summer started with 14 tournament teams from Troy. With June drawing to a close, 12 of them are gearing up for a state tournament.

Three softball teams, the Darlings, Ponytails and Belles all advanced to the next stage. The Darlings will head to Scottsboro. They will begin play on July 12. With more teams still to be determined, Troy will be joined by Dothan, Scottsboro, Enterprise and Taylor Rehobeth.

After winning the district championship at the Sportsplex, the Troy Ponytails will head to Underwood for the state tournament beginning on July 13.

The Troy Belles will join the Ponytails in Underwood after they won another district tournament. They will play the District 5 runner-up in the opening round on July 13.

Troy will send three teams to the state tournament in Enterprise. The AA Rookies, AAA Rookies and Ozone Rookies will all begin play on July 5.

The Troy AA and AAA teams will head to Decatur to begin their run towards a state championship.

The Troy Sportsplex will host a pair of state tournament this summer. After winning the district tournament earlier this month, the Troy 6U Tournament team returns home for the South State Tournament beginning on July 5.  Troy will be joined by 13 other teams including Clanton, Dadeville, Montgomery American, Abbeville, Ashford, Montgomery Southeastern, Enterprise, Prattville, Taylor-Rehobeth, Millbrook, Smiths Station, Eufaula and Eclectic.

The Troy Ozone team has yet to play in a meaningful game this summer. They will get their first taste of action when they play in the state tournament at the Sportsplex beginning on July 12.

The Dixie Boys 15U will play in the World Series beginning on July 18 in Sterlington, Louisiana.