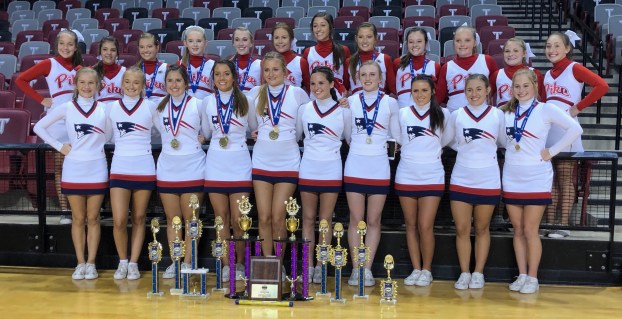 The Pike Liberal Arts Patriots have built a reputation to being the state’s best. On Thursday, they were put to the test when they competed in the AISA/UCA Cheer Camp at Troy University. They passed the test.

The varsity Patriots took home the 3A State Championship after they took home first place in cheer and first in game day routine. They also took home the leadership award.

In years past, the camp was held at Huntingdon College in Montgomery and it was broken into two camps that featured schools in the west and the east. This year, they were all brought under the same roof of Trojan Arena.

“This was the first time we went with every AISA school,” said varsity head coach Hannah Hixon Jordan. “For the first time we can claim a real state championship other than east champions or west champions. They have worked so hard. These are the hardest-working group of girls that I have ever coached.”

Not to be outdone, the junior varsity Patriots also took home plenty of hardware on Thursday. They finished in first place in all their categories, finished first overall and were named the AISA Camp champions.

“Super proud,” said coach Katie Scott. “Today was the AISA equivalent to a state championship. Super proud moment and I was proud to win all the categories against everybody in the state.”

While most students have spent the early portion of their summer away from campus, the Patriot cheerleaders have been spending hours in the heat preparing for this camp.

“I gave them the week off for graduation and Memorial Day, but starting the first week of June we have had two-a-day practices every day until camp,” Jordan said. “We had 21 hours worth of practice left and we didn’t need it. I took it to them and told them ‘I’m not going to cancel anything, you’re going to do it;’ they chose not to. It’s very rare when you have fifteen- and sixteen-year-olds telling you we don’t want any time off.”

Cheering in Troy’s gym brought along a little pressure for the JV Patriots, but showed little of it in their performance.

“There was a little more pressure knowing we were all going to be together. More pressure because camp was two weeks earlier,” Scott said. “We really only practiced three straight weeks to get ready for camp, which is much earlier than usual.”

Both squads had plenty of individual success as well. The varsity Patriots had four named UCA All-Americans. Ansley Adams, Izzy Saunders, Addi Garrott and Raegan Brown all were named All-Americans, while Porter Lankford, Saunders and Adams were named AISA All-Stars.

Both coaches were quick to point out all the help they received from multiple people leading up to their championship performance.

Coach Jordan thanked her assistant Brittany Royal, while coach Scott thanked the school administration, the students and the parents that packed Trojan Arena.

Both squads will take a little time off before returning in the middle of June to start preparing for football season.

Wednesday afternoon, a large gathering of those who have a history with Troy Regional Medical Center celebrated the 50th Anniversary... read more