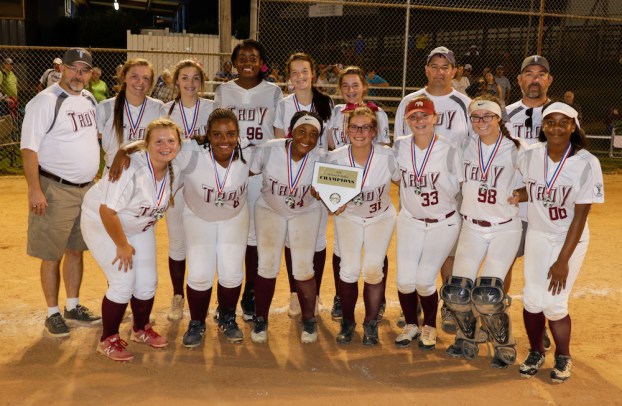 The Troy Belles had a clear path to the state tournament without playing a single district game. Instead of taking that path, coach Scott Reeder and Troy elected to play in a district tournament on the road. They earned their spot in Underwood when they claimed the district title in Rehobeth on Monday night.

Not only did they win the tournament, they made easy work of it. Troy scored over 80 runs and over 60 hits in their five games of the tournament. Each one of Troy’s games ended via the mercy rule.

“The girls 1 through 12 can all hit the ball,” Reeder said. “The key to this was how well we were going to hit. They crushed the ball all tournament. Game one through game five, they never let up.”

Troy scored 12 or more runs in every game.

In all, Troy used a total of five pitchers. In their finale, Troy used four different pitchers.

“Pitching was outstanding,” Reeder said. “Stella Gilbreath, Saddie Leverette, Bella Mauldin, McKenzie Cain and Molly Garrett all pitched for us and they all pitched very well all tournament.”

With the lineup being key to their success heading into the tournament, Reeder was pleasantly surprised with his pitching rotation.

“We really weren’t sure, I knew we had good pitchers, but wasn’t sure how they were going to react,’ Reeder said. “Once we got into the game I was really pleased with how our pitching went.”

The players all agreed that playing in the tournament over the weekend was beneficial. Not only did they find success, but they could see their hard work in practice pay off.

“After the tournament, I asked them how they felt about it and they were all happy that we played in this tournament,” Reeder said. “They are very thankful they had to earn their way into it and now they can see what their potential is.”

Troy will take a little time before heading to Underwood for the State Tournament on July 13.

“We are going to continue to work on hitting because that is the key to all this,” Reeder said. “We will work on little mistakes that we saw throughout the series.”

The Pike Liberal Arts Patriots have built a reputation to being the state’s best. On Thursday, they were put to... read more