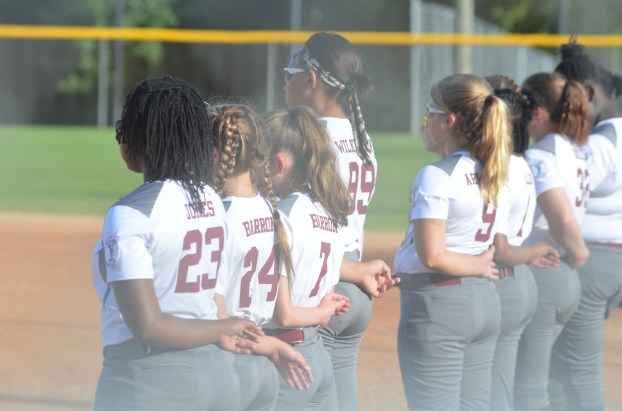 The Troy Ponytails raced out of the first base dugout on Tuesday evening after Kya Wilkerson converted the final out of the championship game at the Troy Sportsplex.

Troy knocked off Opp 12-11 in eight innings to claim the District 6 championship on Tuesday.

It was the second of two wins on the day. Troy defeated Crenshaw Christian 5-2 in a must-win game in the opener.

Troy found themselves down early in game two. Down 5-2, Troy bounced back to score eight unanswered runs to take a 10-5 lead.

After allowing Opp to tie the game, Troy overcame adversity once again, something they have done all tournament long.

Troy lost their first game in their second game of the tournament. From that point on, Troy rattled off four-straight wins to claim the championship.

“It really showed the toughness and the grit of the team,” said head coach Jimmy Sellers. “To lose on Saturday morning and fall into the loser’s bracket is always tough. It shows you what kind of team you really have. The girls knew it was win or go home.”

Troy entered the tournament with Ky Wilkerson as their number one starting pitcher. Griffin ran out of her 13 allotted innings during Saturday’s game. From that point on, Sellers and Troy relied on both Tera Walker and Alissa Barron to pitch to a championship.

Walker started game one Tuesday before Barron pitched the remaining 11 innings of the tournament.

Barron, in her 11 innings of work, shutout the opponent in nine innings.

“I didn’t know how I was going to pitch them, who was going to start and who was going to finish,” Sellers said. “Tera did great in her three innings against Crenshaw. Barron came in and did a phenomenal job. Being a third a pitcher in the rotation, she didn’t see very much mound time in the first part of the tournament. For her to come in and pitch the way she did gives me a lot of confidence moving forward.”

Barron picked up the final three outs of the game on three pitches in the bottom of the eighth inning.

The Troy Ponytails now reset and get ready for the state tournament on July 12 in Underwood Alabama.

The Troy Belles claimed another district championship on Tuesday when they knocked off Rehobeth 22-9 in five innings on Tuesday.... read more