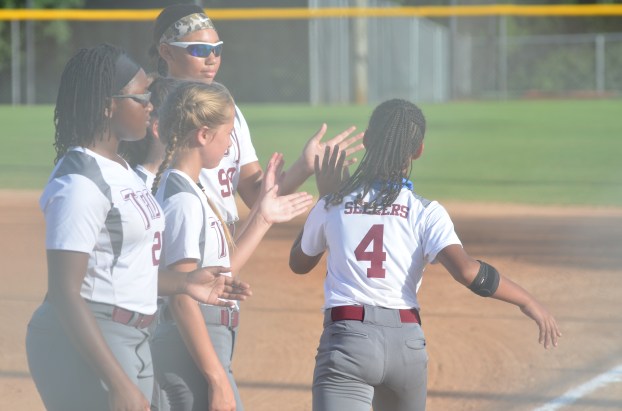 Morgan Allen raced home on a wild pitch to score the winning run on Tuesday night to give the Troy Ponytails the District 6 championship.

Troy found themselves down 5-2 in the second inning before coming back to take the lead in the third inning.

Troy sent 11 batters to the plate in the seven-run third inning. After Jones scored on a wild pitch to bring the score to 5-4, Kyah Wilkerson had the big hit of the inning when the smacked a two run double over the right field wall to give Troy a 6-5 lead. By inning’s end Troy held a 10-5 lead.

Opp battled back to even the score at 10 in the fifth inning and the two teams went into extra innings tied at 11.

After a scoreless seventh inning, Allen reached on an error to lead off the eighth inning and came around to score the winning run.

Before Troy even played for the championship they had to get by Crenshaw County in the semifinals earlier that evening.

Terra Walker got the start for the Troy Ponytails in their pivotal game.

After two quick outs, Crenshaw County scored the game’s first run with a bases loaded walk in the top of the first inning.

After a leadoff error in the third, Crenshaw County doubled their lead to 2-0 on an RBI single. Their lead grew to 3-0 on a groundout to short.

Troy’s Kyla Griffin smacked a two-run triple that soared over the center fielder’s head. It was part of a five-run inning third inning that saw Troy send 10 batters to the plate.

Alissa Barron drove in a run on a bunt single and Tera Walker scored a run on a wild pitch and Troy took a 5-3 lead into the fourth inning.

Troy advances to play in the state championship.

Troy Mayor Jason A. Reeves perhaps said it best. “There are no adequate words for such a moment.” Reeves was... read more