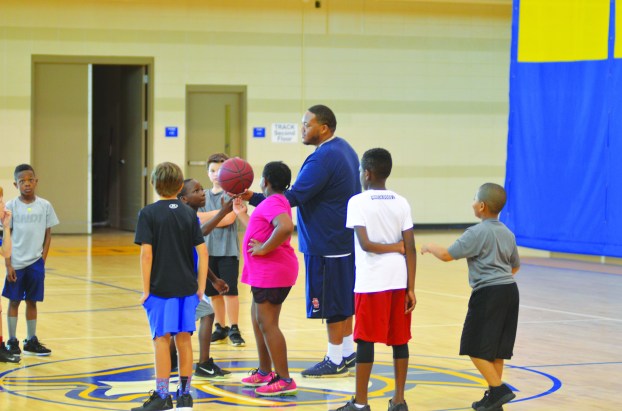 Photo/Mike Hensley Each year Justin Cope hosts a summer basketball camp at the Troy Recreation Center. Above: Cope tosses up a basketball during the 2017 camp.

Justin Cope has long hosted a basketball camp at the Troy Recreation Center during the summer. This year’s installment will take place from July 22 through the 24.

It’s the 11th time the camp will open its doors in hopes of teaching the game to the youth of Troy and Pike County.

The camp will be open for children between the ages of six and 16. The price of admission for each participant is $20.

Instructors will work with each participant on ball handling, shooting, defense and more. The camp will also feature numerous and competitions over the course of the three-day camp that will include free throws, shooting and relays.

In the final hour of each day, campers will be divided up into teams and participate in five-minute scrimmages. During the final hour on July 24, the camp will feature a tournament within the different age groups.

Registration will take place at the Troy Parks and Recreation Department anytime during business hours.

Following their win in the 2D Sports Championship over the weekend, The American Legion Post 70 baseball team took on Ozark’s 17U team on Tuesday at Charles Henderson High School.

Post 70 had an RBI double by Bryce Peavy and an RBI single by Grayson Stewart in the four-run third inning.

In the fourth inning Will Aaron singled to center and Tucker Neven smacked a two-run double to hand Post 70 an 8-2 lead after four innings.

Post 70 scored a run in the fifth and sixth inning to extend their already comfortable lead to six runs at 10-4.

Dalton Grider got the start for Post 70 and pitched the game’s first four innings. He was followed on the mound by Wood Jinright, Coleman Wright and Neven.

Post 70 is scheduled to take on Pedal Valve on Friday beginning at 4 p.m.

The Troy Ponytails knocked off Greenville 10-4 in a must-win game on Monday night at the Troy Sportsplex. The Troy... read more