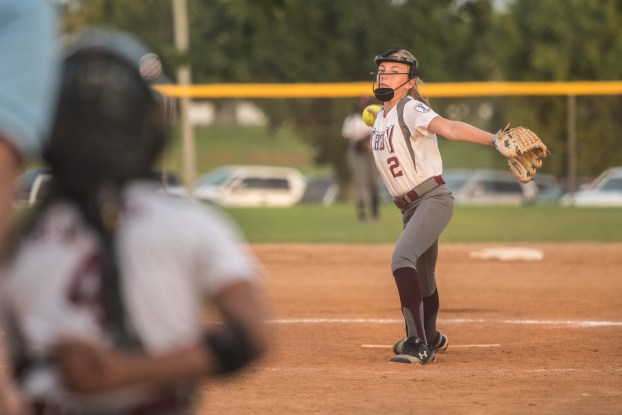 The Troy Ponytails knocked off Greenville 10-4 in a must-win game on Monday night at the Troy Sportsplex. The Troy Darlings also pulled off a must-win when they knocked off Geneva 17-5. The win sends the Ponytails to the final day of the District 5 Tournament, while the Darlings advance to the semifinals.

Kyla Wilkerson entered the game only allowed to pitch four innings. She pitched all four before giving way to Tera Walker.

Greenville sneaked across a run in the top of the first inning when they stole home to earn the early 1-0 advantage.

Troy bounced back in their first at-bat when they sent 13 batters to the plate and scored eight runs. Troy tallied six hits including RBI singles by Addison Armstrong and Indi Carter. They had an RBI double by Kyla Griffin and they had two runs score on errors and another on a wild pitch.

After Greenville cut into Troy’s lead with a run in the top of the second, Troy got it right back when Armstrong drove in Wilkerson on a groundout to bring the score to 9-2.

Greenville used strong base running to their advantage again in the fourth. They scored two more runs to cut their deficit down to five at 9-4. For the second time, Greenville stole home and they scored their second run of the inning on a wild pitch.

Troy scored their final run of the game on a RBI single by Wilkerson.

The Troy Darlings stayed alive in their tournament as well on Monday when they knocked off Geneva.

Troy finished the game with 10 hits. Ava Stone, Lexi Grace Chandler and Paloma Cain all had two hits for Troy.

Troy scored four runs in the first followed by five runs in the second. Their biggest inning came in the third when they tallied seven runs.

Troy will be back in action on Tuesday beginning at 6 p.m.

Troy’s second Juneteenth celebration was bigger and better than ever according to organizer Jamie McClain, director of S.A.F.F.E. Troy. “It... read more