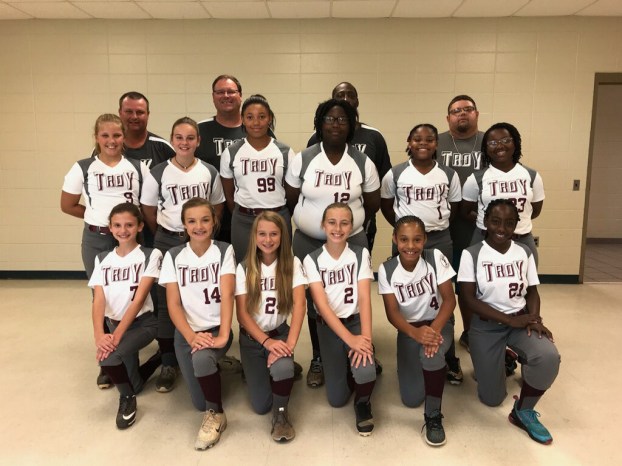 The Troy Ponytails, like most teams, have been battling poor weather conditions during their preparations for the upcoming District Tournament.

On Friday, the Troy Ponytails put all their hard work on display when they open up against Coffee County.

“We have put in a lot of practice and work when the weather permitted,” said head coach Jimmy Sellers. “We have been able to go to the indoor facility at Charles Henderson and the girls have been working really hard. We are ready to kick tomorrow off and finish in first place.”

The Ponytails consists of players that are 11 and 12 years old. It’s a team that Sellers believes is very balanced.

“We have a well-rounded team,” Sellers said. “We have some good pitching and some good bats. We have speed on the bases and we really have a good defense. I think that is what is going to help us out.”

The Troy Ponytails did not have the opportunity to play in a warmup tournament earlier this month due to a lack of teams. Instead, they played in a scrimmage against Opp.

“We moved girls around in different spots and we looked good,” Sellers said. “That, as coaches, gave us a good feeling going into the tournament.”

Pitching always comes into play in tournaments, and Sellers believes he has a deep enough rotation to be effective.

“We have four girls on the pitching staff,” Sellers said. “We have one girl that is a really good pitcher and we are going to try to use her to the best of our ability. We have another pitcher and she locates well. It’s going to come down to innings and being able to use them wisely.”

On the other side of play, the offense will feature plenty of speed.

“We can play small ball,” Sellers said. “We can bunt and steal bases, but we can also hit for power. We are going to try and it mix it to where we have speed in front of our power hitters at different parts of our lineup.”

Troy will take on Coffee County beginning at 6 p.m.

“The key to getting off to a good start is going to be our defense and pitching,” Sellers said. “On the offensive end, we think we can play small ball and power ball. The key is going to have to be our pitchers coming out and do what they have done all rec league season.”

Hustle and effort are the two things that head coach David Bradford and his staff is looking to see out... read more