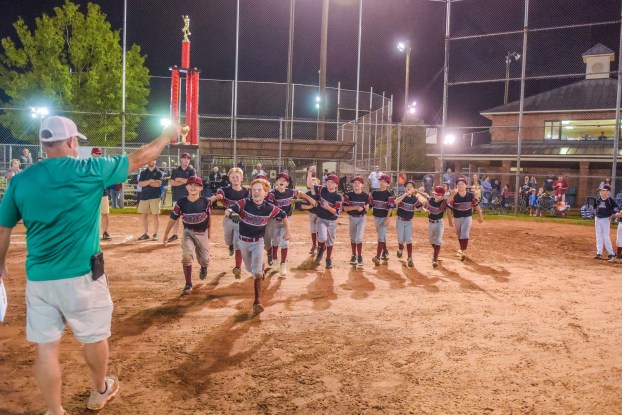 Weather pushed back the proceedings on Monday evening at the Troy Sportsplex, but by night’s end the Troy AAA tournament team hoisted a championship trophy.

“It was great,” said Troy head coach Tommy Stewart. “This is pretty much the same group that has played together the last couple years and played travel ball together. I was glad that we played at home and played the way they did.”

The 10-0 win capped off an undefeated record in the district tournament. Not only did they make it out unscathed, Troy finished off each of their opponents via the mercy rule.

“They worked hard,” Stewart said. “I like this team. We’ll see what happens at the state tournament.”

Even though the team’s offense played a big role in Troy’s undefeated run, it was the defense that surprised Stewart the most.

“They hit the ball, but I really think it was the defense that stuck out to me,” Stewart said. “We hit a lot of balls the same way the opponents did. We would make the plays and they wouldn’t. The innings just kept going. The pitching was good, but the way we played defense compared to how the other teams played defense was noticeable.”

Troy will begin their run at a state championship in about three weeks. Until then, Troy is going to continue to do what made them successful.

“We will get out there and practice a little bit,” Stewart said. “We scrimmage each other every time we practice. I will probably try to find a team around here (to play). It’s about three weeks away so it won’t be that long.”

By Michael Orlofsky On what was once was an overgrown lot, now stands a spanking new home. Although modest and... read more