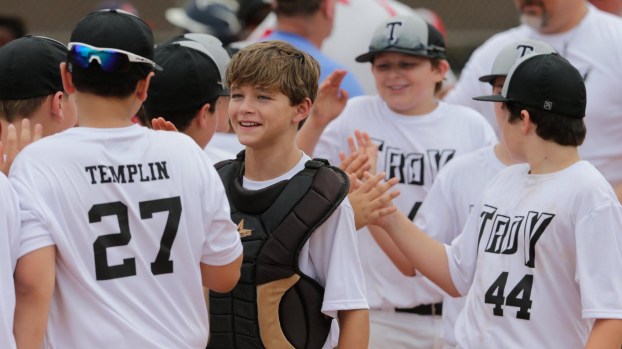 District Tournament begins at the Sportsplex

The teams have been announced and the uniforms have arrived. The only thing left is to play ball. The Troy Sportsplex hosts the Dixie Youth Baseball District Tournament beginning on Thursday evening.

After an exciting regular season, the All-Star season begins and Troy will be well-represented.

“The fun begins,” said Tournament Director David Dickey. “Troy has had a tradition of hosting a lot of tournaments in softball and baseball every year. We have a system, Mr. Dan (Smith) has set aside a template and schedule to go by and we have a pattern going.”

15 Troy teams in all will dawn uniforms this summer. On Thursday, four of them will begin play at the Sportsplex.

“Our numbers are good,” Dickey said. “There are a lot of towns that are not able to have rookie teams, because they can only field one team in each age group. Our youth in Troy, the numbers have definitely been good. We hope to continue to put out a good product for the citizens of Troy. We hope the kids have a good time.”

Putting on a good product is the number one goal for Dickey and his staff, and not just for the citizens of Troy, but for visiting teams as well.

“Our main goal is everyone that comes to Troy for any tournament is to put on a tournament atmosphere and the kids and parents have a good time,” Dickey said. “We don’t want it to seem like another night at the ballpark.”

It takes more than one person to put on a quality tournament. From the concession works to the scorekeepers, there are a lot of unsung heroes this time of year.

“There are a lot of countless hours,” Dickey said. “You have your ground crew, your concession workers, it takes a lot of people pulling in the same direction, making sure everyone has a smooth trip.”

The tournament will begin at 6 p.m. The Troy AA Rookies, The AAA Rookies, AAA and the Ozone Rookies will all be in action beginning today.

The Troy Trojans welcomed a familiar face to the podium on Wednesday when they officially announced Brent Jones as the... read more