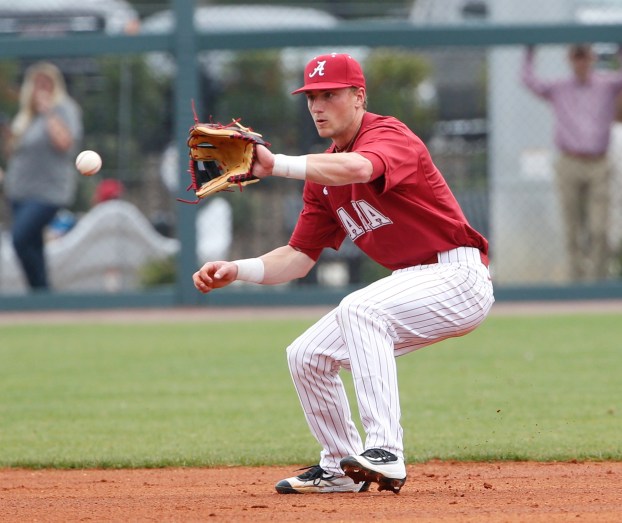 Submitted Photo Former Pike Liberal Arts Patriot Chandler Avant gets ready to field the ball for the Alabama Crimson Tide this season. Avant was drafted in the 30th round of the Major League Baseball Draft in 2018.

Local players finding success at the next level

Bryson Gandy was drafted by the Minnesota Twins on Wednesday afternoon. Gandy will join a few other Troy natives and former Troy Trojans in Major League Baseball.

Gandy became another player with Troy ties in the ranks of Major League Baseball.

Troy native and Pike Liberal graduate Chandler Avant is in his first full year of minor league ball. Avant, who graduated from Pike Liberal Arts in 2014, signed a scholarship to play at Alabama. After his career with the Crimson Tide, Avant was drafted by the New York Mets in the 30th round of the 2018 draft.

Avant began the year in the Class A South Atlantic League with the Columbia Fireflies. Avant has played in 37 games with the Fireflies and is hitting .220 with six doubles and 14 RBI.

Troy native and Florence High School graduate Braxton Garrett was drafted by the Miami Marlins with the seventh pick of the first round in the 2016 draft. Garrett is the son of former Charles Henderson coach Steve Garrett, who led the Trojans to the state championship in 2004.

Garrett is currently pitching in the Class A Advanced Florida State League with the Jupiter Hammerheads. Garrett has pitched in nine games with the Hammerheads. He has a 3.30 ERA in his 46.1 innings of work with 59 strikeouts.

The Troy Trojans have four players currently playing in the ranks of Major League Baseball. Brandon Lockridge, Matt Sanders, Logan Hill and C.J. Carter are in the minor Leagues.

Lockridge is in his first full season in the New York Yankees farm system. He is currently playing with the Class A Charleston RiverDogs. Lockridge is hitting .260 with nine home runs and 31 RBI in 54 games with the RiverDogs.

Sanders is with the Seattle Mariners organization and is currently with the Modesto Nuts in the Advanced A California League. Sanders has played in 41 games this season and is hitting .233 with one home run and 10 RBI. He also has four doubles.

Hill is with the Pittsburgh Pirates and is playing with the AA Altoona Curve. In 54 games this season, Hill is batting .281 with four Home runs, 30 RBI and 16 doubles.

Carter is in his first full year in the Miami Marlins system and is currently playing with the Clinton Lumberjacks in the Class A Midwest League.

Daren Osby is playing professional baseball in the Independent League with the Joliet Slammers of the Frontier League. Osby, in his first three starts of the season, has a 2.07 ERA with 14 strikeouts.