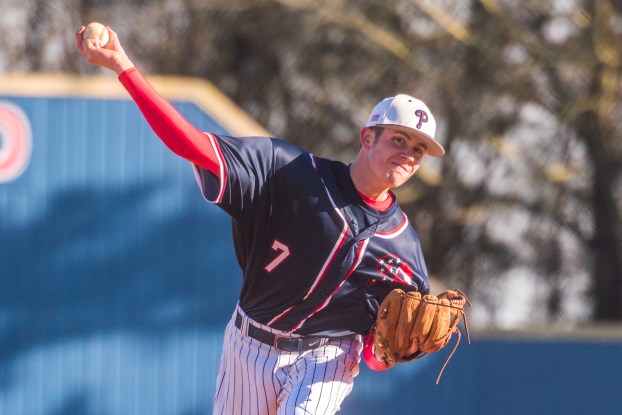 Photo/Troy Athletics Chandler Golden delivers a pitch against Macon-East earlier this season. Golden will be joined by four teammates in the NAAPS All-American Game.

The achievements keep coming for the Pike Liberal Arts baseball team. After winning their second consecutive state championship earlier this month, six members of the team, including head coach Allen Ponder, found out they would be representing the school in next month’s National Athletic Association of Private Schools All-American Baseball Game in Nashville.

Chandler Golden, Holt Steed, Davis Allen, Cody Hollis and Jade Sikes, will all join coach Ponder on a trip to Nashville for the game on June 8.

“I think it’s a great opportunity,” said head coach Allen Ponder. “It’s a huge honor for our players. This is not a statewide thing, it’s a nationwide thing. Our players worked extremely hard and they deserve this opportunity.”

The honor recognizes the top private school baseball players in the country. Ponder will help coach during the game.

Fresh off state Tournament MVP Award, finished off his first and only year with the Patriots with a spot in the All-American game.

Golden played in 35 games for the Patriots. He batted .306 with five home runs and 38 RBI. He added 14 doubles and one triple. On the mound, Golden pitched 38.1 innings and finished with a 2.73 ERA with 43 strikeouts. He pitched a complete game for the Patriots in game three of the state championship.

Steed threw 38.2 innings on the mound for the Patriots in 2019. He helped keep the Patriots alive in game two of the state championship. In all, Steed finished with a miniscule 2.14 ERA and struck out 52 batters.

Sikes, like Golden, contributed both on the mound at the plate for the Patriots. On the mound, Sikes pitched a total of 23.1 innings and had a 6.60 ERA with 23 strikeouts. At the plate, the senior hit .390 with 31 RBI.

Hollis played in 37 games for the Patriots in his senior season. Hollis batted .381 with 17 RBI and 44 runs scored.

The game will be played on the campus of Vanderbilt University.

The Pike Liberal Arts School will host a softball and baseball camp beginning June 10 at both the baseball and... read more