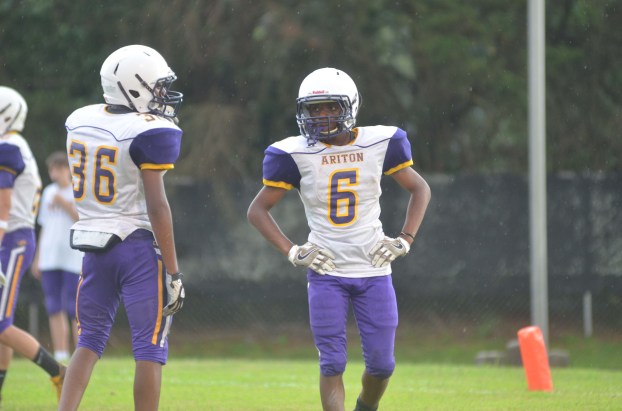 Messenger Photo/Mike HEnsley The Ariton Purple Cats believe they have a deep football team heading into the summer months and high participation in spring practice is a reason why.

The Ariton Purple Cats took on the Pike County Bulldogs on Friday night, but before that they had a successful 10-day spring schedule.

The Purple Cats welcomed a high number players this spring, all of whom look to take the next step after two successful seasons in Ariton.

“We have spent the majority of our time working on us,” said head coach Stephen Kilcrease. “We had to work and prepare for Pike County, but it’s been a good spring. Our numbers are up, we have around 54 varsity guys and we are excited about the numbers. We think overall we have more depth than we have had since I have been here.”

The Purple Cats are saying goodbye to three senior wide receivers in Bryce Peavy and Troy and Daniel Hicks.

“Those were three playmakers that we lost,” Kilcrease said. “Those are big shoes to fill. We lost two guys up front. Those were two guys who, if you needed to move some guys, they could do it. Those guys played on both sides of the football, so it’s like losing 10 starters. We didn’t have a lot of seniors, but the ones we had were significant.”

Despite losing key starters, because of the depth on the roster, Kilcrease and the Purple Cats feel they can pick up where they left off last season.

“We feel good about this group moving forward,” Kilcrease said. “We think when it’s all said and done next year that we have a chance to be pretty good.”

The Purple Cats have racked up a total of 19 wins. They won 10 games in 2017 and nine more in 2018. Kilcrease believes the success of the team has contributed to the high numbers this spring.

“If you go 2-8, you’re not going to have 54 guys playing football,” Kilcrease said. “That’s just the way it is. We were anticipating more than we got out, but we had some that decided not to play. There is excitement and we feel good about the group that we have. We have some young talent that will help this year.”

The Purple Cats took on Pike County on Friday night and it continues a trend of playing quality opponents in the last few seasons.

“We try to strengthen our schedule,” Kilcrease said. “We are playing a good team that could very easily have been in Auburn in 3A. It’s a really good football team that we are playing. It’s going to make us better and that’s the whole point. We could have found somebody to play that guaranteed us winning the football game. We know we are going to be challenged and I believe in the only we you can get better is to play better competition.”

By Jenna Oden The Alabama Law Enforcement Torch Run Team from law enforcements across Alabama have been carrying the “Flame... read more