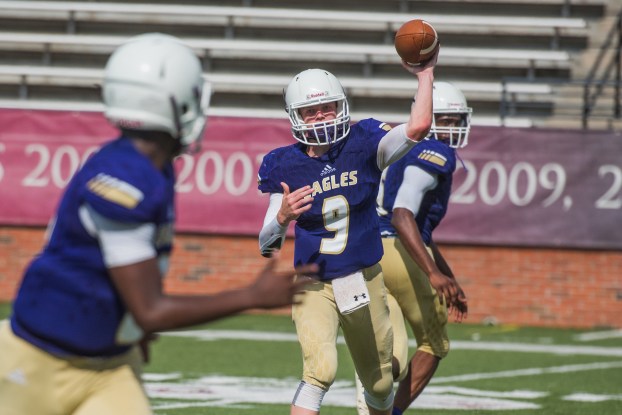 Two local teams in Charles Henderson and Goshen will conclude spring practice with games on Wednesday evening and Thursday afternoon.

The Trojans will play the second game on day one against Callaway (Georgia) beginning at 6:30 p.m.  The Goshen Eagles will begin day two against Geneva County beginning at 3 p.m.

In all, the Classic will feature nine games over a four-day span.

Columbia will take on Early County to begin day one and Slocomb will take on Bullock County will close out day two beginning at 6:30 p.m. It will be Florala vs. Isabella and Wetumpka vs. Paul Bryant on Friday before three games close out the classic on Saturday. Hewitt-Trustville will take on Robert E. Lee to begin Saturday and will be followed up by Cordova taking on WS Neal and Colquitt County taking on Meredian.

“This is our fourth year hosting this event,” said Charles Henderson head coach Brad McCoy. “It’s grown every year. Last year we started inviting teams from bordering states. This year we have Georgia and Mississippi. It’s a full slate with competitive football teams from Alabama, Mississippi and Georgia. It should be a great week.”

The four-day classic will bring colleges from all over the country to Veterans Memorial Stadium hoping to find the next great athletes.

“With the help of XOS Sports, which is a college recruiting and video software company, they have really helped us get the word out to every football-playing school throughout the country,” McCoy said. “We will have a hospitality tent for those guys inside the stadium. They will start filtering in on Wednesday and it’s great. When you see big time Division-I football and you see coaches come in and watch these kids, it makes this event that much more worthwhile. It’s great for the City of Troy, and our program.”

A rain shower was no reason for the vendors at the Springfest arts and crafts show in Brundidge Saturday to... read more