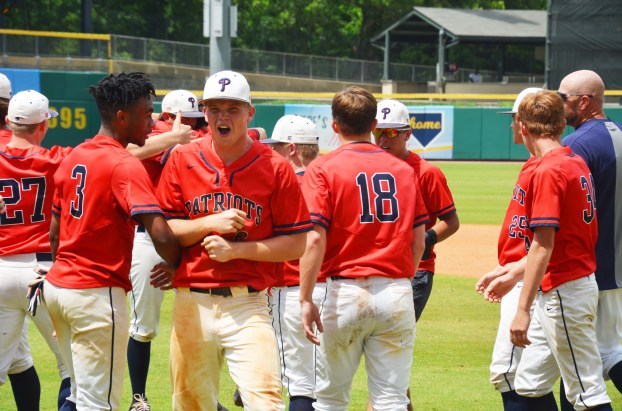 The Pike Liberal Arts Patriots took home their second consecutive state championship on Thursday when they knocked off Morgan Academy 13-8 in comeback fashion at Riverwalk Stadium in Montgomery.

Despite winning their second consecutive championship, nothing came easy for the Patriots in 2019. After starting the season 10-0, the Patriots hit a rare rough spot before turning things around down the stretch.

“We were on a little skid where we lost six or seven games in a row,” said head coach Allen Ponder. “We didn’t understand at that time how to handle adversity.”

The Patriots entered the season fresh off a state championship, but were without key players including Reed and Wood Jinright and Nathan Renfroe. Following their perfect start to the season, the Patriots ran into a little adversity starting with their first loss of the season to Macon East.

“I think for many of the guys when we started 10-0, we just weren’t going to get beat,” Ponder said. “When we took that first loss, we had to learn how to handle adversity and it took a few games for us to do it.”

During the string of losses, leaders emerged, leaders that would make a difference all the way through Thursday’s championship win.

“For five or six games we were really bad,” Ponder said. “When you’re able to come back and turn that thing around that is a direct result of senior leadership. We had a great group of seniors that were here for three years in a row; they won two of them. They understand what it takes to get here. They are leading the young guys and it makes your job (as a coach) easier.”

The Patriots never faced Morgan Academy in the regular season, but after watching them play against Lee-Scott, Ponder knew his team would have to face adversity one more time against the Senators.

“I put my eyes on them one time and I said ‘Boys we are going to have to shock the world, because these guys are really good,,” Ponder said. “That’s what they came to do and that’s what they did.”

The two nominees for the A.C.E. Award presented by the Troy Exchange Club Thursday both overcame obstacles to remain successful... read more