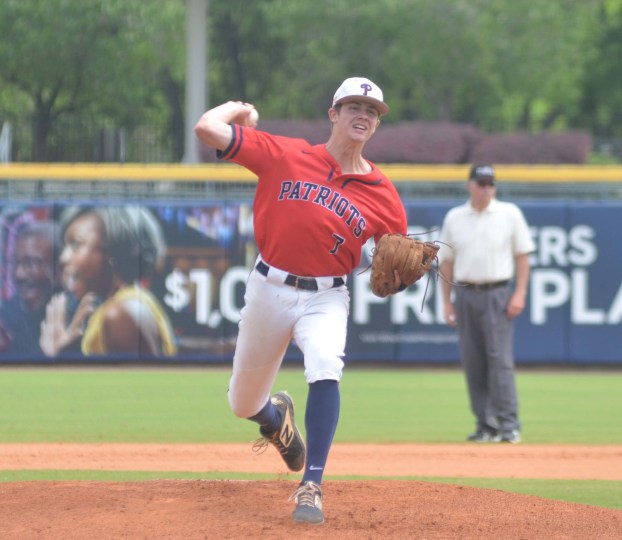 Pike Liberal Arts senior Chandler Golden found out shortly after game two on Wednesday that he would get the call in game three on Thursday afternoon.

By day’s end, Golden not only walked away as a state champion, but he also was named the tournament’s Most Valuable Player.

Golden pitched all seven innings in the Patriots’ 13-8 win on Thursday, while striking out nine batters.

Golden closed out game two’s win on Wednesday and had to sleep on Wednesday knowing that he would get the call in the final game of the season.

“I just thought about going out there and being a dog and get it done for my team,” Golden said.

Getting it done against a lineup that featured four Division-I hitters is no small task. The top three hitters in the Senator lineup will be in the SEC next season, and one of them may even be a first round pick in next month’s Major League Baseball Draft.

Golden and the Patriots found themselves down for much of the game on Thursday, but it didn’t slow down the senior starting pitcher.

“I just had to find a way to get through it,” Golden said. “I knew I had a good team behind me and I was able to take care of it at the end of the day.”

After losing game one 13-1 on Wednesday, the Patriots were able to find some confidence in their game two win, something that Golden carried with him to the mound on Thursday.

“They were beatable,” Golden said. “We started putting pressure on them and it showed that they are beatable.”

After tying Morgan Academy in the seventh inning, the Patriots tacked on a total of six runs, giving Golden plenty of cushion heading into the bottom of the seventh.

“It was unreal,” Golden said. “They took care of the job when we needed it and they busted it open.”

Golden not only got it done on the mound, he also brought the Patriots to within one run when he homered to left.

“It just kind of happened,” Golden said. “I saw it coming 2-0, read fastball and unloaded on it.”

Golden wasn’t on the roster a season ago when the Patriots won their first title since 2012, he was playing for Rehobeth. This season he was happy to help lead the rest of the team to their second-straight championship.

“To say that I can give these guys two in-a-row means a lot,” Golden said.

BACK TO BACK: Patriots rally to win AISA state championship for second consecutive year

Some called Morgan Academy the best AISA team ever coming into the championship series, but the Pike Patriots proved experience... read more