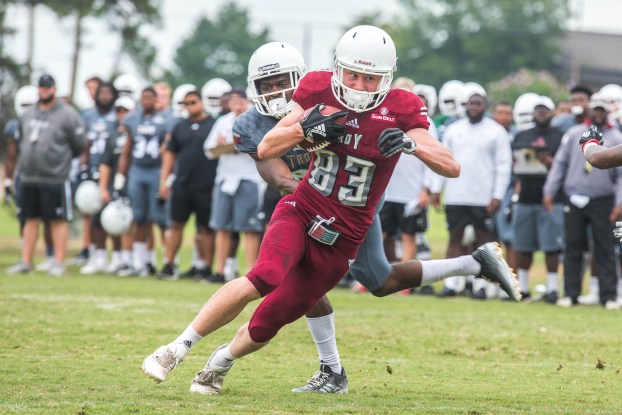 Making strides: Whittemore hopes to have another strong camp

Troy redshirt sophomore Luke Whittemore is participating in spring practice and if prior spring practices are any indication, the wide receiver is set to take another step forward heading into the 2019 season.

Whittemore and the Trojans are nearing the midway point of spring camp and are starting to acclimated.

“I like the way things are going right now,” Whittemore said. “We are kind of midway through the process here and I think we have come a long way. Offensively, we are getting accustomed to the system and I’m just playing loose.”

Whittemore has made a name for himself during spring practice, as well as fall camp, over the last few years. Former head coach Neal Brown has gone as far as saying he was the team MVP last spring. For Whittemore, it’s all about being consistent and making the most of each opportunity he gets.

“It’s big to come out here and showcase what I can do during the spring and fall,” Whittemore said. “As I get older I want to be consistent in that. It’s not about coming out here and making a play a day or two, but being consistent throughout the process. That’s what I am trying to do as a rising sophomore.”

After a strong fall camp last year, Whittemore had the opportunity to play in all 12 games in 2018. Whittemore hauled in a total of 12 catches for 200 yards. His breakout performance came against Georgia Southern in a key Sun Belt Conference game late in the season. Whittemore led The Trojans with 110 receiving yards and had one touchdown. He had back-to-back catches that went over 40 yards.

“That was a really good feeling seeing it pay off,” Whittemore said. “It kind of gave me a confidence boost for the rest of the season. It was a really good experience getting to play on that big stage and make some plays. I am looking forward to building on that this upcoming season.”

Whittemore also had success with his arm in 2018 – he threw two completions including a 35-yard touchdown against Coastal Carolina.

This spring, Whittemore gets the opportunity to impress a new set of coaching staff, headed up by new head coach Chip Lindsey.

“I like them,” Whittemore said. “Coach Lindsey is a really good guy. He’s pretty laid back. He is a teacher, he wants the most out of us. He’s been patient with us. He knows that we have some playmakers and he wants us to continue to develop.”

Through the first handful of practices, Lindsey has liked what he has seen out of his receiver.

“Luke has had a good spring so far,” Lindsey said. “He has made some plays when he has gotten opportunities. The best thing about Luke is that there is not a lot of drama with him. He’s going to be there every day and do what he is supposed to do. He is going to do what he is coached to do and do it the way you want him to do it. When he gets opportunities, he has been making plays.”

The Trojan receiving corps will have a different look next season. They have lost their top three receivers in Deondre Douglas, Damion Willis and Sidney Davis. The trio accounted for 20 touchdowns and 1,747 yards. Whittemore will return along with Tray Eafford and will be joined by newcomers Reggie Todd and Khalil McClain.

“Guys like Khalil and Reggie, I think we have some good depth right now,” Whittemore said. “I know we did lose our top three guys last year Dre (Deondre Douglas), Damion (Willis) and Sidney (Davis), but we have guys that can replace them. I think we got a lot of big guys that can go up and make plays on jump balls, some really good athletes.”

“That is something we are going to take advantage of,” Whittemore said. “We are going to try and take shots down field. I think we can definitely play to that strength when the season rolls around.”