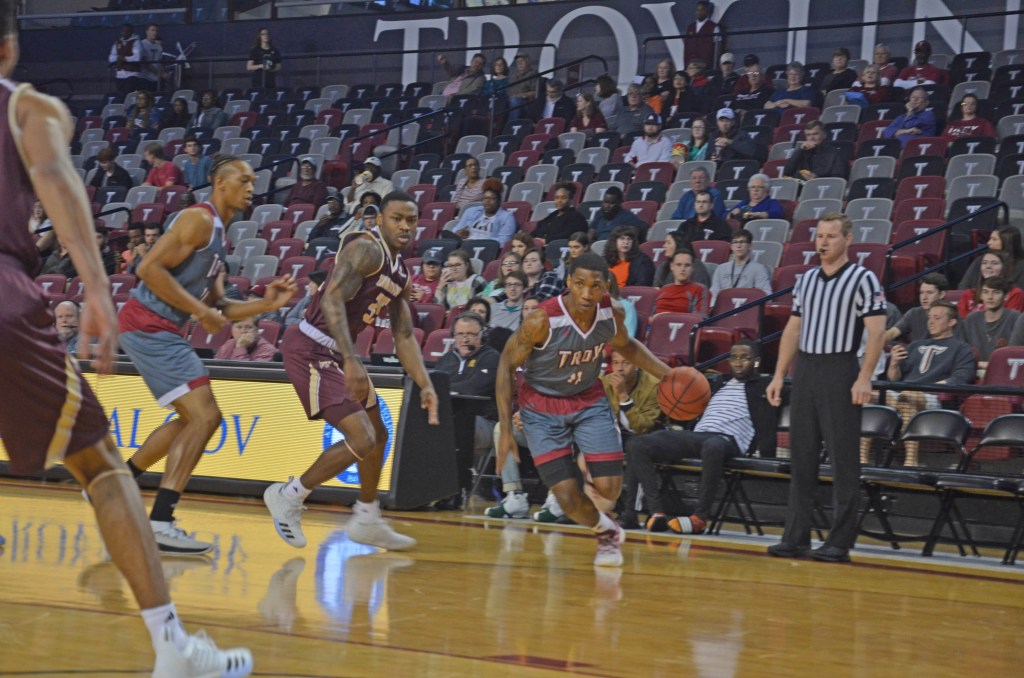 The Troy Trojans fell to Texas State 58-44 on Thursday night. Above: BJ Miller looks to drive the lane.

A second-half run by Texas State led to a 58-44 loss for the Troy Trojans on Thursday evening in Troy.

The loss for Troy drops them to 11-16 overall and 4-11 in conference play. It’s the seventh loss in the last eight games for the Trojans.

“You don’t have to be a rocket scientist to see what our problem is right now,” said head coach Phil Cunningham. “We are struggling to score. Give them credit, they are the best defensive team in the league. We are missing open shots; I think it’s partially a mental thing. We are just struggling to score right now.”

The Trojans had the early advantage against the Bobcats. They led 16-10 early after shooting greater than 50 percent.

The Trojans were outscored by the Bobcats 10-5 the rest of the way and went into the locker room at halftime trailing 30-21.

“We had two really good days of practice and we had good energy before the game,” Cunningham said. “I just had a feeling they would play well. We did early on, we just couldn’t sustain it. I wasn’t pleased with how we closed the first half and let them take the lead. We challenged our guys at halftime to fight them in the second half.”

After shooting greater than 50 percent during the early parts of the half, Troy’s shooting percentage dropped to 28 percent.

Alex Hicks led the way with eight points in the first half after he converted on two of his three three-point attempts.

Alex Hicks was the lone Trojan to finish in double figures. He finished with 13 points on 3-9 shooting. He also had eight rebounds. Javon Johnson and Darian Adams each had eight points, while B.J. Miller had seven.

The Trojans will be back in action on Saturday when they host Texas-Arlington on senior day. Tip-off is scheduled for 2 p.m.