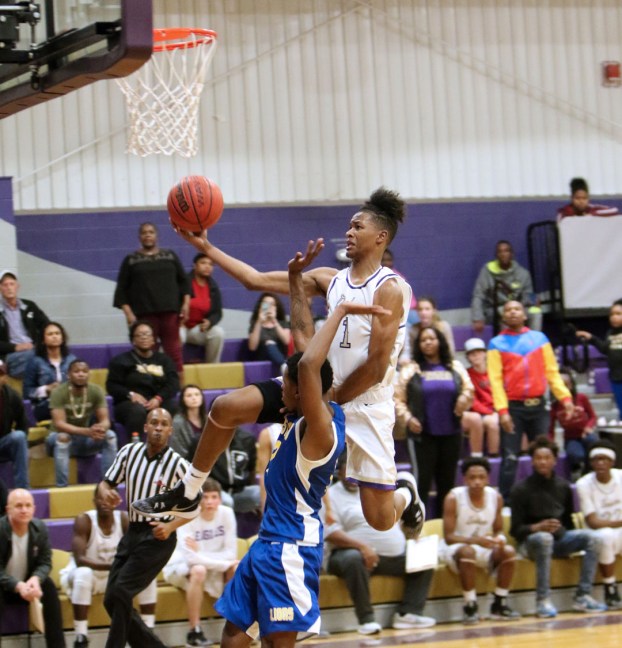 Messenger Photo/April Brown Dakari Pelton of Goshen goes up for a layup against Houston County on Tuesday night in Goshen.

Eagles season comes to an end with loss to Houston County

The Goshen Eagles’ last ditch effort in the waning moments of Tuesday’s Class 2A sub-regional came up short in their 41-38 loss to Houston County in Goshen.

The Eagles had the ball with just under three seconds remaining down by three points. Goshen attempted to inbound the basketball from the baseline, but the pass fell out of the hands of a Goshen player and into the hands of the Lions to end the game and Goshen’s season.

“It’s on me,” said head coach Daniell Powell. “I made some bad calls at the end. That’s on me. All these players played their hearts out. They should have won this game. They have to blame their coaches.”

The Eagles outscored the Lions in the opening quarter by four points and carried a 13-9 lead in into the second quarter.

The game remained tight in the second half, beginning in the third quarter. After trailing 20-19, the Eagles embarked on an 8-0 run to get a seven-point lead, their largest of the game, at 27-20.

The Lions outscored the Eagles 8-1 the rest of the quarter and took a 30-28 lead into the final quarter.

Neither team lead by more than four points in the fourth quarter. The Lions tied the game at 36 with a free throw with 2:13 remaining.

The Eagles gained their final lead of the game when Raquan Martin scored on a basket with 1:24 remaining.

The Lions immediately answered with a three-pointer to put them up 40-38. After a made free throw, the Eagles went to the free throw line down three with just under three seconds remaining. They missed the front end of the one and one, but retained possession after the Lions knocked the ball out of bounds. The Eagles failed to get a shot off and the Lions clinched a spot in Friday’s regional semifinal game.

“It was a good season,” Powell said. “I hate we had to go out like this. I’m proud of this team. Like I said, it’s my fault. I am going to take the blame for this. Give credit to these kids.”

The Charles Henderson Lady Trojans knocked off Valley 85-21 on Monday night in the Class 5A sub-regionals. The win clinches... read more