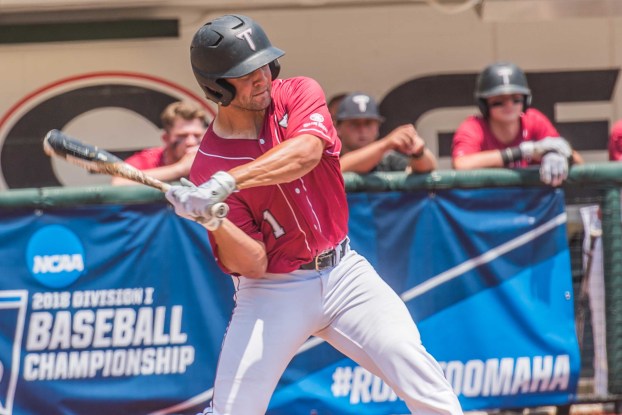 Messenger photo/jonah enfinger Drew Frederic and the Troy Trojans open up the 2019 season on Friday night when they host Central Michigan.

The Troy Trojans begin the 2019 season on Friday night at Riddle-Pace Field in Troy. When fans start filing into the ballpark, they will immediately notice former key names no longer in the starting lineup.

All but one of Troy’s statistical leaders has moved on. Frederic returns to Troy in 2019 as a Junior.

“It’s impossible to replace Matt Sanders,” said head coach Mark Smartt. “A four-year starter, leadoff (hitter), shortstop. Just impossible. Joey Dennison arguably had one of the best seasons a Troy player has ever had. I don’t know if we replace them one-for-one.”

The Trojans will try and create more runs this season according to their head coach. Along with Frederic’s 28 stolen bases, the Trojans led the conference with 117 stolen bases and Smartt believes that could be an area of strength once again.

“We have good team speed, which is always a great trait to have,” Smartt said. “I thought that was an important trait that last year’s team had. I think we will have to create a little more offense; I’m not sure where the power is going to come from yet. Speed is a good equalizer; it keeps you alive. I hope that speed will play dividends up and down the lineup.”

With Lockridge, Sanders and Denison no longer in the lineup, the attention will shift to guys like Frederic, Rigsby Mosley, Chase Smartt and others.

Mosely and Frederic both earned Preseason All-Sun Belt honors. Frederic was also tabbed a Preseason All-American and was selected as the D1 Baseball Sun Belt Preseason Player of the Year. Along with Smartt and Rigsby, Frederic will be looked upon to help lead the Trojan offense.

“It’s cool to get all that stuff, but it doesn’t mean anything until you go out there and perform,” Frederic said. “At first it was really hard (leading), like that’s not really me. I have never been that person, I was the one that followed what Joey, Brandon and Matt did. I am still adjusting to it. I am working every day to be more like them.”

Mosely finished last season with a .322 batting average as a freshman. Following the season he was named a freshman All-American after turning in one of the most impressive freshman seasons in Troy history. He was one of three players on the roster with 50-plus RBI and one of six with a batting average over .300.

There weren’t too many holes in Troy’s lineup in 2018. With Frederic and Mosely anchoring the lineup, the hope is they can feature a deep lineup once again.

“I think there is potential for that for sure,” Frederic said. “We have a couple of young guys that are good enough to step up for us. I have 100 percent confidence in them and I think we will have a deep lineup again this year.”

The Troy offense will swing their bats for the first time this Friday night when they begin the season against Central Michigan beginning at 6 p.m. It will be the first of a four-game weekend series.

The Goshen Eagles overcame a slow start in their 59-44 win over Samson, giving them their fourth straight area championship.... read more